As revealed on B&T yesterday, Tourism Australia has launched its latest global campaign – and its eye-watering $38 million price tag – with the tag “Come Live our Philausophy”.

The campaign’s the work of agency partners M&C Saatchi, Digitas and UM and, apparently, attempts to highlight everyday Aussies’ informal approach to life. 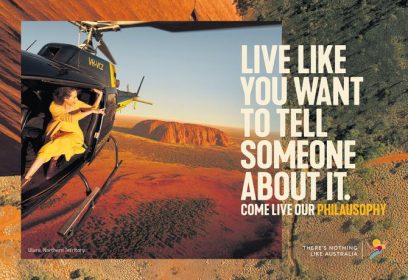 And it definitely comes with all the things you’d expect from an Australian tourism campaign – Uluru, the Great Barrier Reef, the mandatory kangaroo and the mandatory Hemsworth.

The new work was borne of research that found  70 per cent of “high-value” travellers believed Australians had a different perspective on life, while a further 73 per cent found the lifestyle appealing.

But, judging by the social media reaction, not everybody’s impressed with Tourism Australia’s latest efforts on flogging the nation’s attractions to the world. 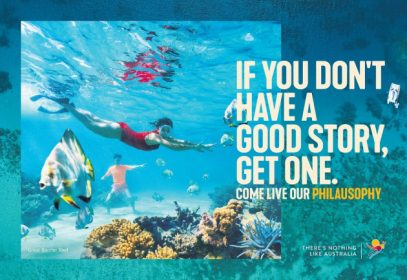 As one dissenter tweeted: “If I was in the meeting where Tourism Australia’s ‘philausophy’ line was spawned, I would have jumped out the window!”

“Ad agencies usually run this stuff past focus groups to see if it’s a complete dud before they release it to market. Either they didn’t this time or the focus groups were all drunk,” opined another.

While other social media critics used the launch of the campaign to ask whether ‘philausophy’ also related to Australia’s treatment of refugees or climate inaction.

Others were quick to lay the blame with former Tourism Australia managing director and now prime minister, Scott Morrison.

“Stuff up. Who the bloody hell thinks these absurd things up? Morrison’s incompetent hands all over it… I just cringe in embarrassment,” wrote another non-fan.

Another added: “Is Uncle Morrie still working for Tourism Australia on the side? That tag is ridiculously dumb. It’s half an idea, that they couldn’t quite finish, so went with anyway.”

Although, it must be said, SoMo left the tourist organisation some 13 years ago. 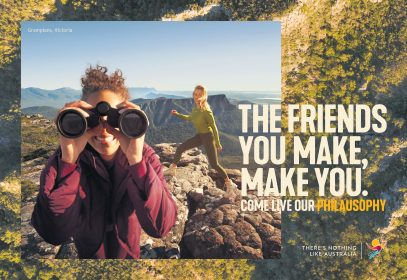 On a more erudite level, others argued that some overseas tourists – namely those from Asian nations – may not understand what ‘philausophy’ even stood for. 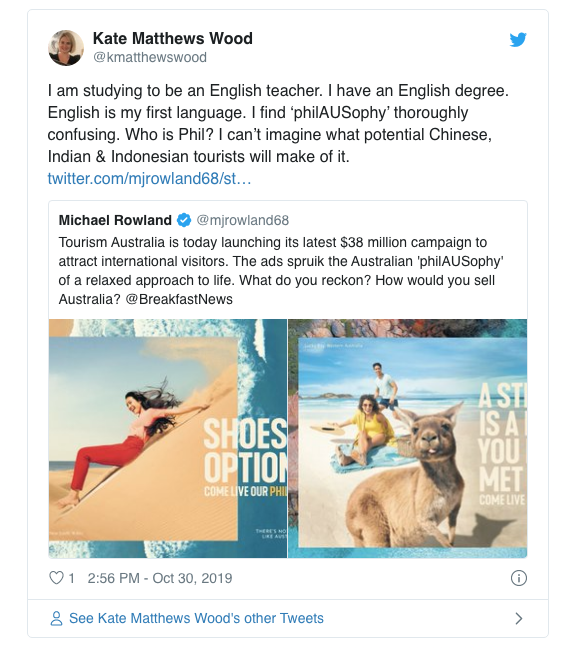 Commenting on the ads, University of Queensland tourism researcher Pierre Benckendorff said: “Your attention immediately goes to the tagline and I wonder whether they’re being a bit too clever…and why they didn’t just change the ‘s’ in philosophy to ‘z’ and have ‘PhilOZophy’.

“I’m not sure how well that play on words will translate into the Japanese and Chinese markets. So that part of the campaign I have some question marks around.

“They’re trying to shift the focus away from destination attributes like beaches and rainforests and outback to the people of Australia,” the Doctor added.

Benckendorff was also quick to stress that Aussies often suffered from cultural cringe when it came to homegrown tourism ads, primarily due to the fact that the ads weren’t designed for local audiences who were quick to deem them naff or clichéd.

The ads will be rolled out over three years in 15 key markets in Europe, North America and Asia.

“In such a competitive global market, the sell is tougher than ever,” Birmingham commented.

“We need to stand out from the crowd and find a unique selling point that sets us apart from our competitors.

“At its core, ‘philausophy’ is about giving travellers from around the world a taste of what makes Australia such an enjoyable destination by shining a spotlight on the people, lifestyle and personality that make Australian experiences so memorable.”

Tourism Australia added in a statement: “A deliberately Australian play on words, ‘philausophy’ aims to capture the philosophy of Australians and their informal approach to living, which research shows is highly appealing amongst visitors.”