Gett’s latest promotion, which is not available in Australia, will let customers sign up on its Surge Sucks website and then send their Uber surge-priced receipts. Gett is then offering customers an equivalent free ride equal to whatever they paid in surge pricing, rounded up to the nearest $US5.

Uber often faces criticisms for hiking up the prices during times of high demand- on weekend ends, holidays, bad weather or during the Lindt cafe shooting. The ride-sharing app argues that by raising the prices it encourages drivers to go out and meet the increased demand, plus customers are given plenty of warning about the surge charges.

Gett has been pushing an anti-Uber ad campaign in New York City; Nathan Roth, Gett’s spokesperson, told the Observer: “Uber is our biggest competition in NYC and their customers have a major point of frustration—surge! Our campaign highlights Gett’s surge-free guarantee.

“We welcome any competition from Uber. New Yorkers deserve to choose whether or not to pay surge. Competition is long overdue and good for the city.” 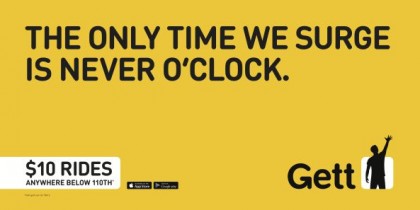 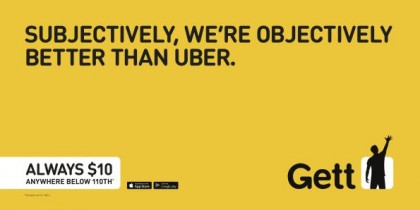 Gett isn’t the only competition Uber is facing in New York, the city’s mayor Bill de Blasio has proposed legislation to cap the number of Uber vehicles to avoid congestion.