New research from Roy Morgan shows that in the six months to June 2017, there were 8.3 million people using mobile banking in an average four week period, up from 4.83 million in 2013, an increase of 3.47 million or 71.8 per cent in only four years.

These are the latest findings from Roy Morgan’s Single Source survey of over 50,000 consumers per annum. 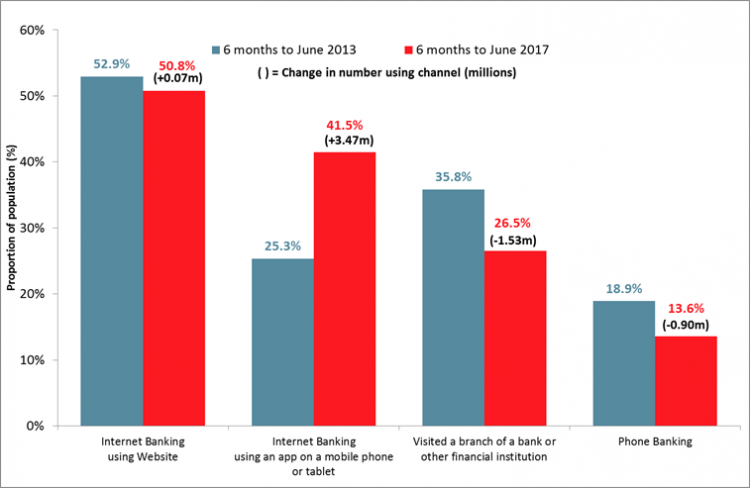 The dramatic growth in mobile banking of 3.47 million customers since 2013 is in stark contrast to the reduction of 1.53 million using branches. Internet banking using a website remains the main channel for dealing with a bank (50.8 per cent) but this has shown a decline from 2013 (52.9 per cent) and on current trends looks like being taken over by mobile banking in the next few years. Phone banking is declining and is now down to 13.6 per cent from 18.9 per cent in 2013.

Nearly two-thirds (62.8 per cent) of Millennials use mobile banking, compared to only 21.5 per cent using branches. They now number 3.17 million users or 38.2 per cent of the total market. This is well above generation X with 2.03 million or 24.5 per cent of total mobile banking users. 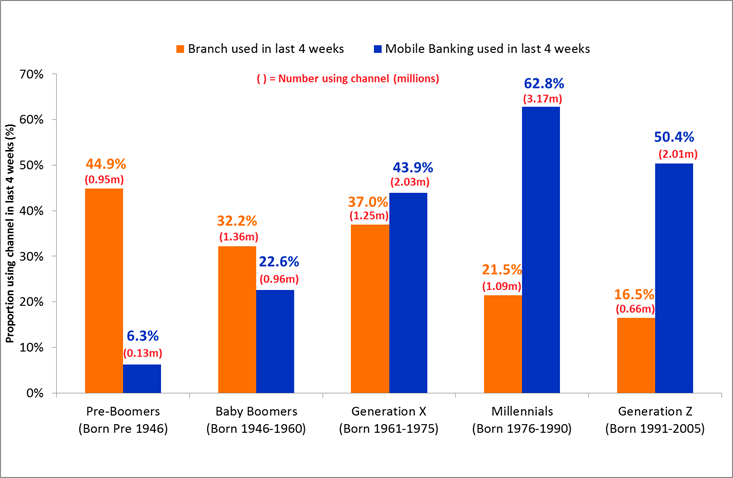 Branches still play an important role among older customers, with 44.9 per cent of pre-boomers and 32.2% of baby boomers using them over an average four week period. These are the only two groups where branches appear to be preferred to mobile banking. 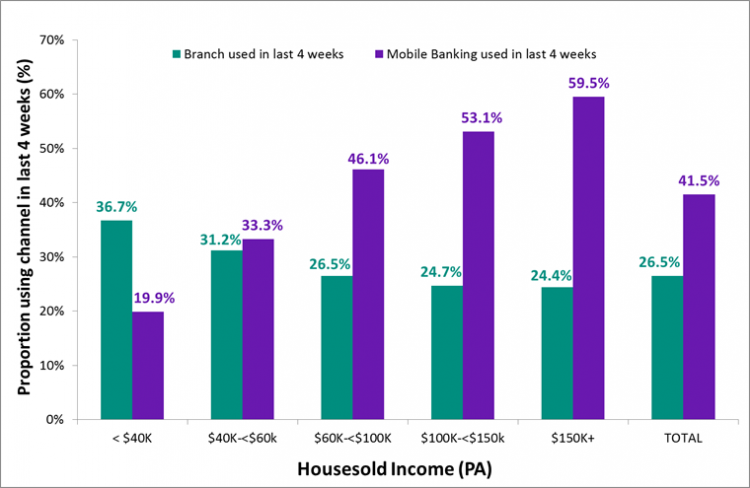 Despite the fact that the use of mobile banking rises rapidly with income, branches are still used by around a quarter of consumers in households with incomes of $60k pa or more.

Commenting on the study, Roy Morgan’s industry communications director, Norman Morris, said: “The switch to mobile banking has been a result of rapid technological change, reinforced by high satisfaction levels with this relatively new way of dealing with banks. Satisfaction with mobile banking is the highest of all banking channels with 91 per cent, compared to branches with 87.1 per cent and as a result it is likely to be a contributing factor to the increasing preference for mobile banking. The decline in the use of phone banking is likely to be largely as a result of it having the lowest satisfaction of all the major channels with only 79.4 per cent.

“The strong preference for mobile banking by Millennials is a result of them having grown up with technology and so they have more easily moved to it, compared to the older generations who have been brought up using branches. As Millennials get older however, their financial needs are likely to become more complex and so they may also require some type of personal contact, possibly involving a branch. The idea that with increased complexity and incomes that there is likely to be a role retained for branches is shown by the fact that their use remains fairly consistent  for all those with household incomes over $60k pa.”