It was a clear and sunny day and World Cup fever was hot. Like a hot air balloon – the famous Christ the Redeemer statue of Brazil was spotted high up in the heavens looking down on Sydney’s West, where a large number of Aussie soccer fans dwell.

The son of God had been reincarnated in bombastic balloon form, donning a Socceroos jersey with the hashtag #KeepTheFaith inked on the front. And above the hashtag? The strategically placed logo of the company which masterminded such an exploit.

Barni Evans, marketing director at Sportsbet, led a collaboration of more than 100 “creative problem solvers” from nine different companies across the globe to build the giant Jesus.

Our Lord and saviour took to the skies in Sydney, Melbourne and Adelaide.

“There was a fair amount of WTF in all three cities,” says Evans.

And did it offend the clergy? “Unfortunately it did, but then this is about humour,” Evans explains. “Humour is subjective and sometimes causes offence. Our job is to ensure our target market, and those who exert influence on them, appreciate our humour.

“Luckily in this instance, the vast, vast majority of spectators enjoyed the balloon. When it comes to brazenness, floating a one tonne object over a major populous felt pretty bold,” he added. The brand certainly caused enough of a ruckus to inspire a number of complaints to the Advertising Standards Bureau.

So are Sportsbet a cheeky pack of bastards? Probably. And brazen marketing tactics work wonders for them when it comes to ROI.

“The return on investment was large… had the team offered me the outcome prior to the project – would I have bought it? Categorically yes,” says Evans. The stunt created a measurable spike in social too. 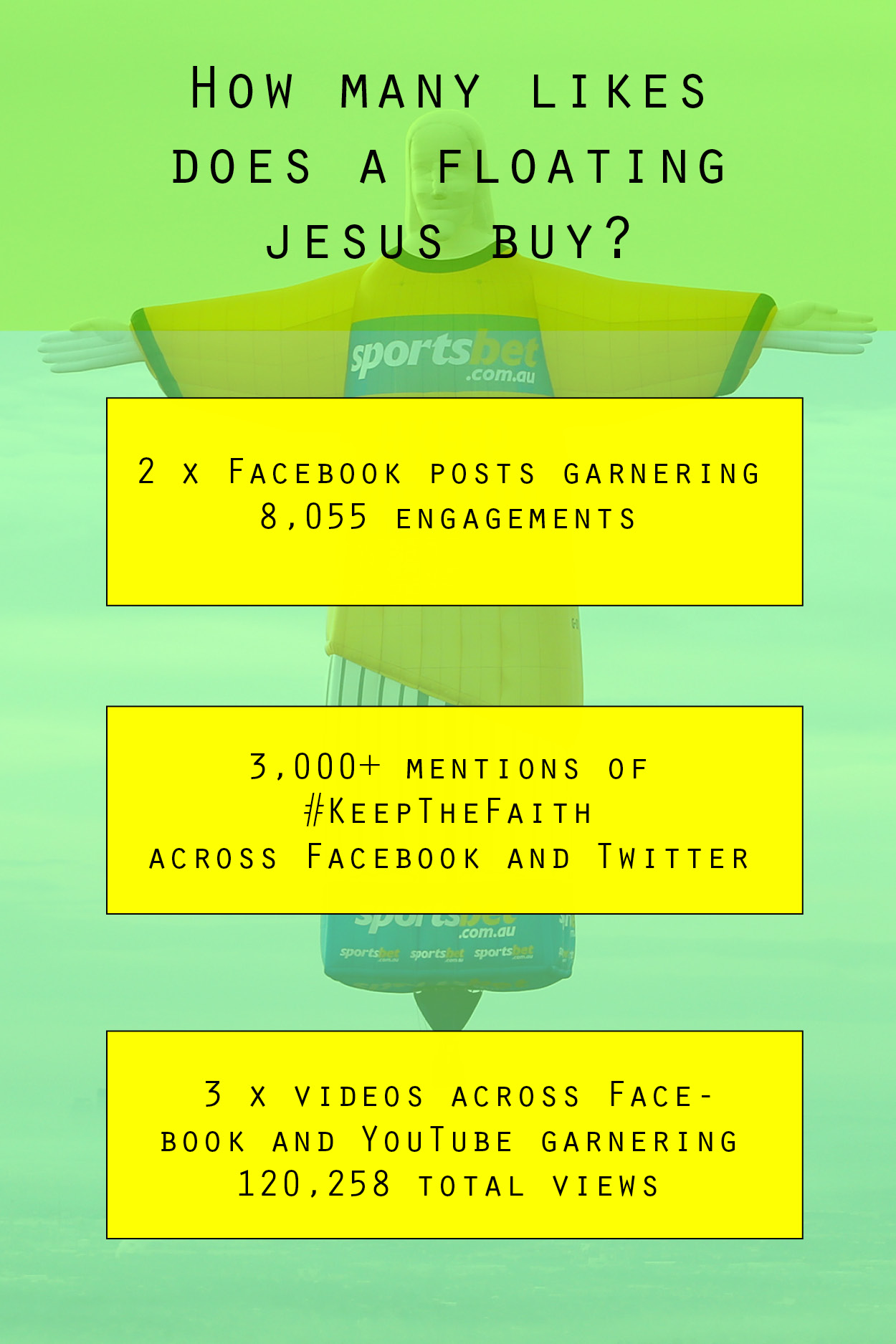 “Sportsbet’s purpose is to add excitement to life. From a product perspective, having a cheeky bet on a match makes the game more exciting. When it comes to our brand marketing, that means entertaining people. We try to give them something laugh at, and talk about. Our target market is 25-44 year old Australian men – and we think they relate to cheeky humour,” he adds.

It’s not the first time the brand has caused a raised eyebrow or two. Last year to coincide with the 2013 Rugby Lions Tour, Sportsbet painted a giant sign showing a lion taking it from behind, visible only from the sky.

Evans says: “We believe in the principle of associative loyalty. Our customers appreciate the great product and market leading value for money. From there – we think customers are more loyal if those functional benefits are delivered by a brand they associate strongly with.”

From shagging animals to floating religious symbols, expletive responses are just the reaction Sportsbet hopes for. Evans says: “Even among those people who were critical of us publicly, many of them told us quietly that they loved it. Ultimately what matters to me are my customers, and the data suggests they feel closer to the brand than they did previously.”