Advertise with us
Posted 5 October, 2018


A live TV breast cancer examination has divided viewers after it showed a male doctor examining a model’s naked breasts.

However, the important segment has divided viewers. Some complaining that breakfast TV was no place for nudity, others concerned that it was a male doctor doing the examination, while others just complained about the complainants. Check out the segment below:

For most parts, viewers praised the important health message the segment was trying to portray. One viewer tweeting: “Excellent to see the demonstration on #Lorraine of self-examination to help detect signs of possible breast cancer. Done in a matter of fact and non-prurient way”.

Another wrote: “It’s great for this issue to be covered! I had breast cancer back in 2012 and it’s so important to know your own body and check out anything which is unusual! Better to be safe than sorry! Xx”.

But it didn’t go down with everyone. A viewer named “Emma” was unhappy about having to view early-morning nudity. “Not necessary to show boobs on TV just for a demonstration, could have had an animated video.. Similarly why is a man always talking about woman’s problems,” she wrote.

Another non-fan added: “Well this is different breakfast viewing. Very glad that my child has left for school already.”

While others felt that a female doctor would have been more appropriate: “Dear @ITV. In this day & age could you not find a FEMALE TV doctor who actually knows what it’s like to have breasts to advise us about checking them rather than a male one? It might encourage more to #youknowbreast. It’s just patronising that #Lorraine is asking a man what to do.”

Thankfully, most were supportive of the important health message the segment was trying to portray and lashed those who had criticised it. 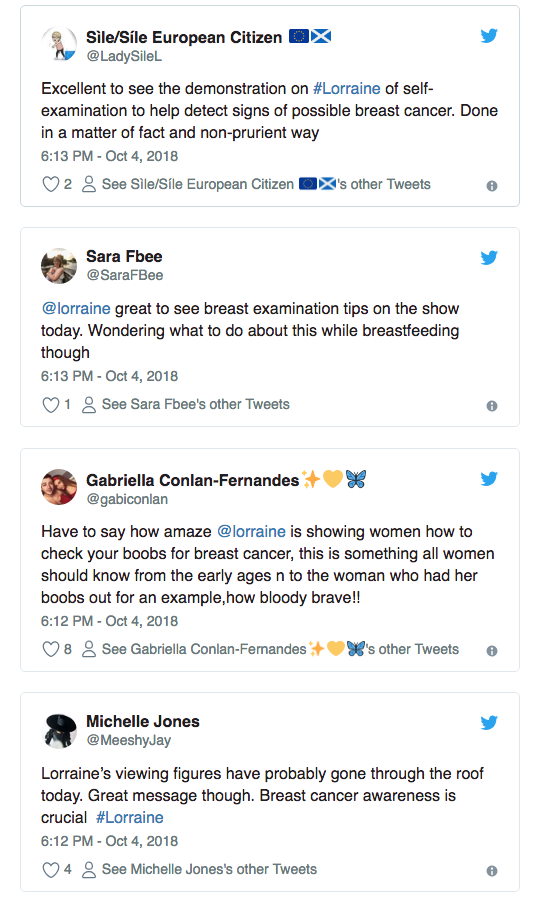