Aussies who watch cricket on TV almost always associate kfc with the Big Bash, according to a new report by research firm roy morgan.

The fast-food retailer has reaped the rewards of its long-term sponsorship of Australia’s BBL, with over 4.2 million Australians – or 21 per cent of Aussies aged 14 and older – associating KFC with the Big Bash.

Roy Morgan CEO Michele Levine said it can take time for sponsorship of major sports to pay off, but KFC’s sponsor naming rights show just how effective a long-term commitment can be.

Levine said: “KFC has been the naming rights sponsor for Twenty20 Cricket in Australia for over a decade now.

“Over 4.2 million Australians now associate KFC with the Big Bash League and when you start analysing people who have a declared interest in cricket whether by playing, attending, or watching on TV this penetration rises dramatically”.

When it comes to the Big Bash, KFC is miles ahead of other companies and brands. 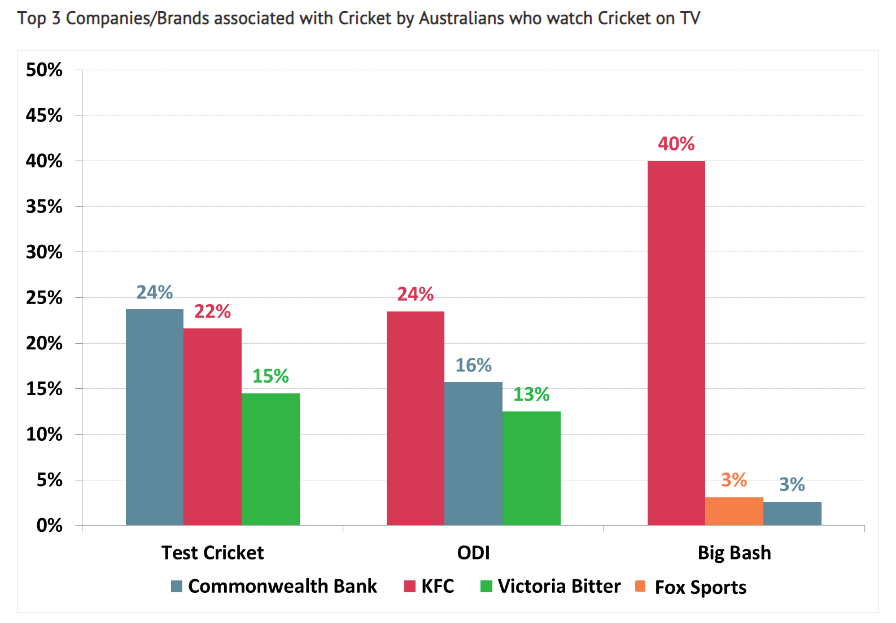 The Commonwealth Bank is associated far more strongly with Test Cricket for which the bank had a long-term sponsorship arrangement.

Other brands to have an association with Test Cricket as mentioned by TV cricket watchers include XXXX Gold, Qantas, Fox Sports, Swisse, Asics, Vodafone, Bunnings Warehouse and Toyota.