Cotton On is in the middle of a copyright shitstorm after being accused, and subsequently taken to court, by US-based designer Elektra Printz Gorski, all over a vegie pun.

Gorski started designing and making clothing and other prints and gifts holding the slogan, ‘LETTUCE TURNIP THE BEET’ in 2011, selling in SoHo and through online market store Etsy, with much interest in her product – even a Real Housewife of New York was seen sporting a shirt!

But earlier this year, Aussie-based Etsy saw the Cotton On tank tops being sold in Melbourne, and after contacting Gorski, discovered the Cotton On Group didn’t have the rights to reproduce her trademark.

Gorski subsequently wrote to COG in January, accusing them of infringing her copyright and trademarks over her vegie slogan, also known as LTTB, and demanded it cease distribution and disclose how much of the product it had sold. 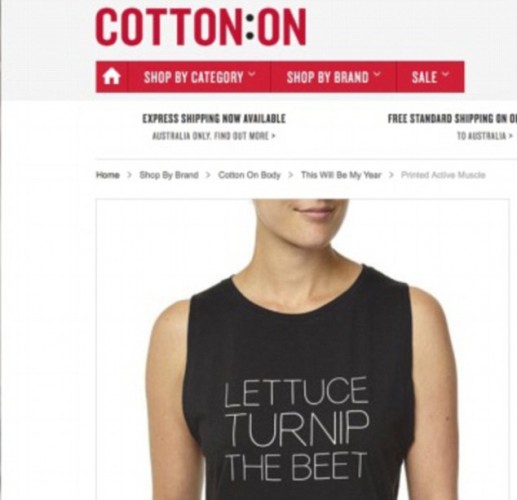 The mammoth battle that has since ensued has seen COG deny infringing Gorski’s right and requesting she withdraw her “groundless threats” of legal proceedings lest they take her to court in order “to protect its business and reputation”.

“Until receipt of your email, our client did not have knowledge of any trademarks registered in your name,” COG’s lawyer, Gadens partner Adam Walker said, per SMH reports.

“In any event, notwithstanding the existence of trade marks apparently registered to you, our client is not using LETTUCE TURNIP THE BEET as a trademark.

“Those words are clearly an amusing pun and being used on Cotton On products in that context.”

Gorski has since lodged a statement of claim in the Federal Court in April, claiming loss and damage, as well as insisting that COG knew, or ought to have known, the LTTB products ripped off her own designs. 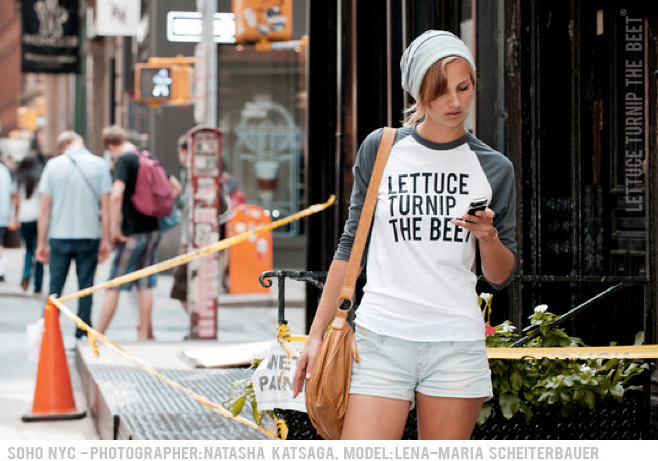 The case has been arranged for mediation in August, and despite COG denying Gorski’s allegations, stopped manufacturing further LTTB products.

“The Cotton On Group has the upmost respect for the work of all individual designers and has a zero tolerance approach to the flagrant copying of designers,” the company said.

“As a business, we take matters like these very seriously and closely govern our design processes with a strong focus on training and educating our people on respecting boundaries of inspiration.”

Interestingly, Gorski claimed a senior designer at COG ‘pinned’ a top bearing her LTTB design on Pinterest three years ago, before producing clothes and homewares of the same “look and feel” last year.

And it’s not the first time Cotton On has been busted snaking designs from other businesses. In 2008, youth brand Elwood sued COG for nabbing its T-shirt designs, with COG employees admitting in court that they were instructed to create products that looked and felt similar to the Elwood designs.