David Jones today launched its spring/summer 17 (SS17) campaign titled ‘Everything Under The Sun’.

Starring Australian supermodel Bridget Malcolm, the series of images recreate the essence of a quintessential Australian summer where the days are long and hot and outfits take you from work, to the beach and beyond. 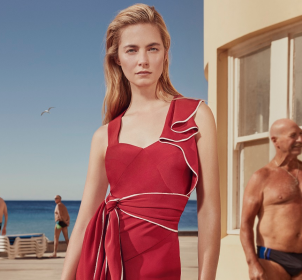 Joining Malcolm in an all-star Australian line-up is Indigenous Australian supermodel Charlee Fraser, and South Sudanese born Australian model Adut Akech. Photographed by celebrated photographer Hannah Scott Stevenson, the models are captured against pastel summer sunsets, endless beach days and glamorous pool side settings. The heat and languid energy of summer in Australia is almost tangible in the campaign stills which were shot across several iconic locations in Sydney.

Since being discovered in Western Australia at the age of 15, Malcolm has worked with the likes of Ralph Lauren, Stella McCartney, Tommy Hilfiger, Burberry, DVF as well as starring on the Victoria’s Secret runway in both 2015 and 2016. Malcolm has also previously walked for David Jones, most recently appearing on the Autumn Winter Collections Launch runway in February 2017.

“As the days get longer and hotter, dressing becomes more versatile and less structured, and Australian’s are looking for outfits that can take them from the office, to the beach, to a bar or a backyard barbecue. There is an element of perpetual holiday and festivity in the air, and the David Jones buy for SS17 has that summer lifestyle at heart.”