Youth fashion retailer General Pants is copping some social media flak after it used naked models in a campaign to promote a new store opening in Sydney’s CBD.

The campaign included on the online video below which features a naked woman, naked man skateboarding and a naked busker to boot. Fear note, the rude parts have been pixilated.

To promote the address of the store, General Pants also had decals plastered to Sydney streets that featured a topless model directing customers to the store on George Street. 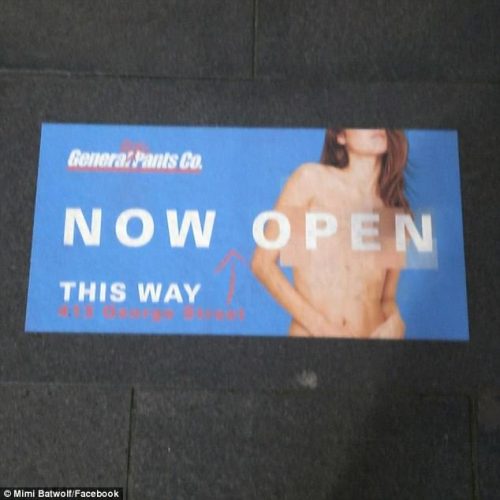 However, the campaign has divided General Pants’ typically cool customer base. Some decrying it as misogynistic (despite featuring men, too), while others thought it was simply a new working of advertising’s famed “sex sells” adage.

One female customer wrote to social media: “I’m genuinely curious: what does a naked, faceless woman’s body have to do with your store and its apparel? It seems that you’re relying on the objectification of women to sell a product. I have to admit it’s turning me off visiting your stores in the future.”

While a number agreed with the comments, others appeared in favour of the fleshy marketing approach.

“Sex sells, most basic marketing rule. Get over it,” one wrote. While another added: “People these days get so offended by the dumbest shit.”