There has been another chapter in the ongoing advertising war between Vegemite and Marmite overnight, and this time it’s the famous Lord’s cricket ground in London at the centre of the sledging.

The ongoing slanging match has taken place in celebration of the Australia vs England Ashes Test Cricket series.

With the second test getting underway overnight (although the entire day’s play was washed out), Vegemite took the chance to get on the front foot, with the help of thinkerbell.

The latest barb “bowled a bouncer” at the esteemed Marylebone Cricket Club (MCC), the owners of Lord’s Cricket Ground – widely regarded as the ‘home of cricket’ – where the second test is being played.

The ground is famous for its members wearing their ‘bacon and egg’ jackets, but the Australian spread has resituated the historic red and black in its latest sledge to its UK rival.

“We are flattered that the members of the home of cricket have been showing their support for Vegemite for years,” said a Vegemite spokesperson.

“We’re only sorry we didn’t give them the recognition they deserve for supporting Vegemite until now. We’re not sure how Marmite must feel, knowing that the MCC Members openly prefer the taste of Australia.” 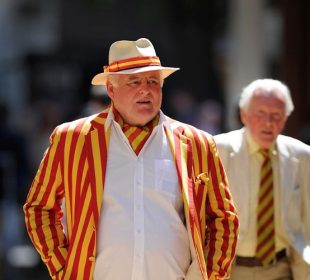 Vegemite has also introduced a special deal for the cricketing enthusiasts.

Any MCC members who turn up to Lord’s in their red and yellow Vegemite colours, with a jar of Marmite can then send the Marmite jar to us in Melbourne Australia, and we’ll swap it for a new jar of stronger, bolder Vegemite.