A new study has found that Australians have a better perception of Myer than David Jones (for price and range), however, it’s Kmart that wins hands down for customers through the door.

The study, by Roy Morgan Research, aimed to understand the perceptions Australians have of different department stores – be they discount or upmarket.

For shear numbers through the door, Kmart was the clear winner. In an average four-week period, 22.6 per cent of the population (or 3.6 million people) bought something from Kmart. Next was Target with 19.5 per cent (3.1 million) and then Big W at 18.9 per cent (3 million people).

Many of the respondents to the survey agreed that three stores all carried a big range of items which is what attracted them to the stores. Big W was seen as having the best range, Kmart was seen as the cheapest and Target having the best quality. Check the full results out below: 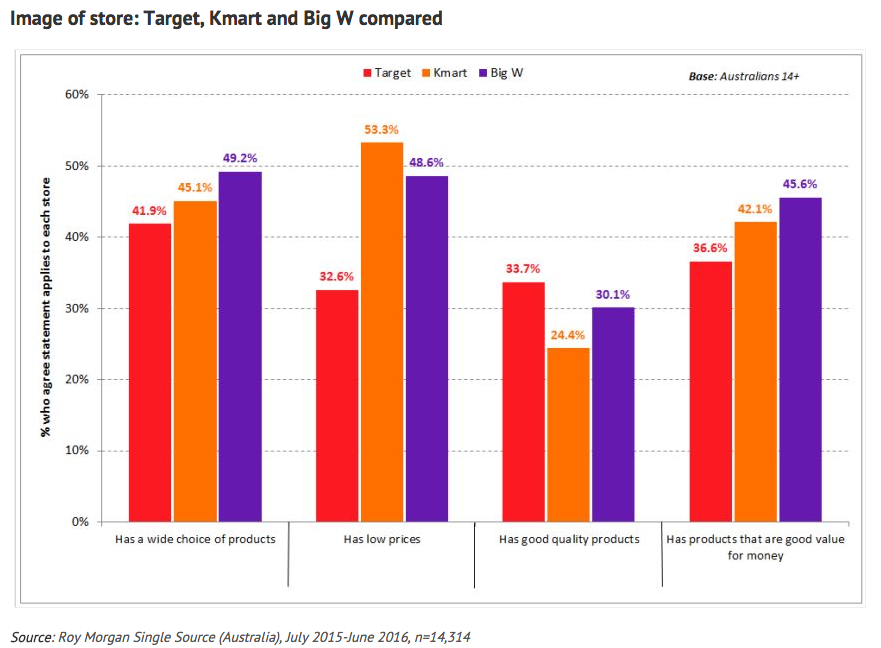 However, when it came to the upmarket department stores – Myer and David Jones – Myer certainly claimed bragging rights for customers through the door.

In a four week period, 10 per cent of the population (1.6 million people) had purchased something at Myer. That was compared to David Jones with 4.7 per cent (or 760,000 people).

Just over four in every 10 Australians believe that both Myer and David Jones have ‘good quality products’, while 34.2 per cent of the population perceives Myer as having ‘a wide choice of products’ (compared with 27.7 per cent who see David Jones in the same way). The proportion who think either store has ‘low prices’, on the other hand, was negligible. 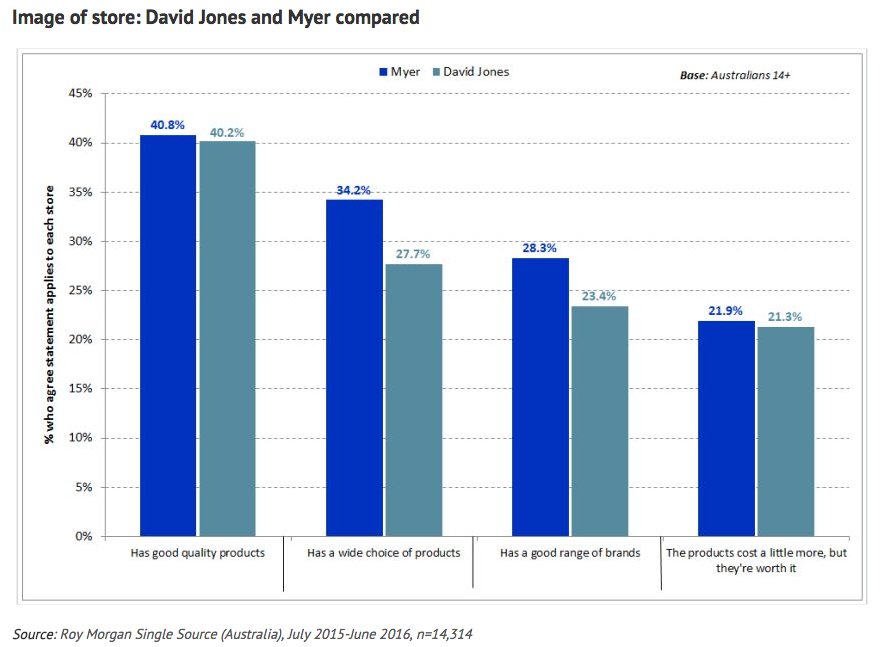 Commenting on the study, Roy Morgan Research’s industry communications director, Norman Morris, said: “With Australians set to spend more than $48.1 billion in retail stores in the lead-up to Christmas this year, department stores stand to benefit from this festive-season shopping frenzy. In fact, we’re expecting a pre-Christmas spend of over $3 billion at department stores alone.

“Widely perceived as having low prices and products that are good value for money, Kmart and BigW are probably on the Christmas shopping itineraries of Aussie consumers keen not to break the bank this festive season. Although Big W has lost ground to Kmart in recent years, consumers still see it as a budget-friendly, one-stop shopping experience, which is ideal for those keen to knock off their Christmas-gift list in one hit. Meanwhile, people looking for high-quality, brand-name gifts no matter what the cost will more likely head to Myer or DJs.

“It’s interesting to see how public perception of these stores has evolved over the last few years. For one thing, the proportion of Aussies who’d consider shopping at each retailer has increased, with some age groups showing particularly striking changes in this respect. Whereas 43.7 per cent of 18-24 year-olds said they’d consider shopping at Target back in 2014, that figure has shot up since then to 52.5 per cent; this age group has also shown a growing interest in shopping at David Jones (40.1 per cent, up from 33.2 per cent). Meanwhile, Kmart’s appeal for teenagers 14-17 has risen from 44.7 per cent saying they’d consider shopping there to 49.3 per cent.