‘Brand’ is the worst word in the world, says Andrew Marlton, the political cartoonist behind First Dog on the Moon. And yet his frank and confronting cartoons have arguably transitioned from just images to a branded conglomerate.

After his political cartoons gained traction during his time at independent publication Crikey, First Dog became a household name. In 2014 The Guardian snaffled Marlton over to their space. We had a sit down with him to find out how the whole First Dog brand came to be.

“Brand is the right word, but it’s also the worst word in the world,” he told B&T. “I’ll call it a brand, but I wish there was a better word than that.

“I didn’t deliberately set out to create the fabulous brand that has emerged today, but I always really cognisant that it was going to have a brand.” 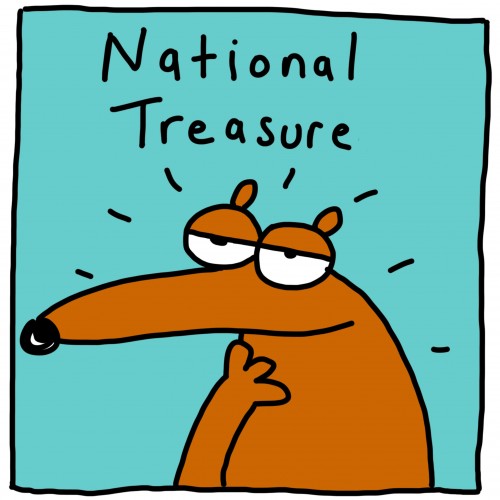 Marlton was originally going to name his cartoons The Doggy Times. But, due to the dirty mind of the internet, some rather risqué images emerged when searching for the title.

“I then had to go on and come up with something else,” he remarked. “I slaved over the name of the ‘thing’ and it had to be perfect. But I just couldn’t come up with anything.

“Years before that though, my friend had an Atari 64 game console – this was in the 80s – and one of the most amazing thing about this gaming console was that you could create your own animation.

“And I created an animation of a dog in a space suit dancing across the moon. And I called it the first dog on the moon.

“So when it came time to come up with a name I was like ‘right, I can’t think of anything good, so I’ll call it First Dog on the Moon until I can actually think up what the name is going to be’.

There was one point where Marlton said he thought about changing the name when realising it was starting to become a brand.

“And then I had that [same] problem of ‘what am I going to change it to?’ and I hadn’t been able to come up with what it was going to be instead.”

His main thing was he just didn’t it to be known as ‘Andrew Marlton’. “That’s not very interesting, is it?”

The brand isn’t just cartoons though. There’s now plush toys, events, books and more. Marlton said he’d always wanted the whole thing to seem like a big conglomerate of bandicoots slaving away to produce the fortnightly cartoons, rather than just him “drawing stupid pictures”.

“Just because it’s just more fun,” he said, quipping, “cartoonists are just so terrible and they’re not very interesting”.

He didn’t set out to be anonymous, and doesn’t actively pretend to be something else, but Marlton said he’s quite happy if people think there’s an “art department of bettongs” in the “eucalyptus grotto”.

The Future of political cartoonists

While they’re images instead of words, Marlton said political cartoons still fall into the same bucket as other news media and journalism, and faces the same challenges.

As many publishers are cutting editorial roles, Marlton said the money challenges are just as alive for him and The Guardian as others.

“The future of it for me, me specifically, is The Guardian figuring out how to monetise or reframe how they monetise what we do,” he said.

“I think every media organisation is facing the same challenge. Google and Facebook, everyone’s just discovered they’re eating everything. You have to find other avenues.

“I’m very lucky to be paid by The Guardian to do this.”

One avenue that many publishers have been increasing is native content, however when asked whether he would ever do a commercial cartoon, Marlton hesitated.

“That sort of advertorial stuff is a troubling area because you have to make sure there’s distinctions between editorial and commercial, but that’s also what advertisers clearly want now,” he said.

“I’ve done cartoons to promote issues and projects that people are doing. But I couldn’t see myself doing like a toothpaste commercial.