In 1989, the ‘Back to the Future’ movies gave us a fictional snapshot of what Hill Valley would look like in 2015. And a whole host of prophesies actually came true: wireless gaming, tablets, Google glasses, video conferencing and this year, Nike are releasing the Nike MAGs Marty McFly wore complete with self-tightening laces.

Now, imagine waking up in 1954 armed with an almanac of today’s technology, sophisticated marketing techniques and channels…  what impact could you make on a couple of the great ad campaigns of the 20th Century?

In the late 1940’s, Marlboro switched focus to the effectiveness of filters in cigarettes to combat concerns of the long-term health effects. Leo Burnett’s inception of the “Marlboro Man” came from an issue of ‘Life’ magazine, where the story of real life cowboy Clarence Long inspired a switch from models to real people. Within a year, Marlboro’s market share rose from less than one percent to becoming the fourth best-selling brand. This convinced Philip Morris to stick with the cowboy. 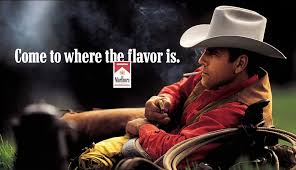 Clarence Long would have been the perfect foil for a modern day content marketing strategy.

The ‘cowboy’ is an exemplification of the Jungian Archetype. It is the Explorer, a unique, American version of the warrior known from ancient myths, representing a lone traveler.

We could only imagine that Clarence Long (@longsmoke) would make the perfect talisman for this archetype. For the ‘modern’ man of the 1950s, it would represent a virtual world connected by a longing for escapism. It’s easy to imagine the typical posts: ‘@longsmoke Long day ranching. Thank god I got my trusted #marlboros with me #goodtimes #marlborocountry’. Instagram @longsmoke would contain lens-flare saturated images of a world of studs, cacti and Stetsons, accompanied by #filter.

On Facebook we can check into Marlboro Country the ultimate men’s destination that contains life-hacks for the urban cowboy from lasso knots, cut throat shaves to a series of iPhone photography hacks called ‘filter-tips’.

This campaign premiered in 1985, the year of the present in Back to The Future.

The story begins with the opening bars of Marvin Gaye’s ‘I Heard It Through The Grapevine’ and saw Nick Kamen walking into a launderette and strip down to his boxer shorts.

Devised by John Hegarty and Barbara Noakes of BBH, the ad campaign was designed to try and switch Levi’s fortunes, which at the time were becoming the jeans worn by people’s dads. Research showed that the intended target audience for Levi’s 501 (15 to 19) saw the United States of the fifties and sixties as a cool time and place in history. “Grapevine” was the first of four Levi’s-related songs to all make the Top Ten, a feat that made advertisers realise that choosing the right music was of paramount importance pushing a product on TV. This early form of Integrated Marketing saw a single in the chart, an ad on the box and a 501 logo alongside the artist’s name on the record sleeve.

And just like the Back to the Future narrative, the ad jumps back to a mythical world somewhere in the 50’s, exemplifying the archetype of the Rebel.

The Rebel archetype is in some ways a definitive behavior of the American, inexorably linked to freedom. It’s the Wild Wild West with all its renegades and law-breakers. Later, it was rebels like Thomas Edison and Henry Ford that thrust America into the age of invention and technology. This idea of rebellion leading to innovation, reform and ultimately renewal is at the heart of this archetype.

In this world, we can only speculate what strategies would ensue.

Blog 501, called ‘The Grapevine’: a depositary for fashion and celebrity that feeds social channels from Pinterest to Twitter (#hearditonthegrapevine). Levis would no doubt encourage great user generated content by asking fans to create their own Launderette scenarios. On (the aptly named) Vine, Levis could ask you to stop a looping video of the washing machine cycle to try and spot the 501s. The stonewash bath-hack for shrink fitting your Levis will be in everyone’s sponsored story and the 501 Spotify List will spawn sales of a thousands of other rediscovered classics from Curtis Mayfield to The Flamingos.

From creating disruptive advertising to fueling dreams of escapism – both these groundbreaking campaigns began by consistently aligning to an archetype: The Rebel and The Explorer respectively. Which is often the start of any strong content marketing strategy. Finding our authority to publish before creating content pillars, tonality and ultimately the best channels to reach our intended audiences.