In this guest post, PHD strategy director, Remi Baker (pictured below), says she’s embracing the future… even if it means being microchipped by her employer! Read about her dalliance with the year 2030 here…

I’ve always been intrigued about the future.

From watching movies like Minority Report where we interact with screens in mid-air, to Her, a future where we fall in love with our virtual personal assistants. There are many depictions of how artificial intelligence (AI) and technology will change the way that we interact and behave. 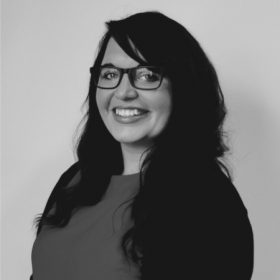 In my role as strategy director at PHD, a media agency dedicated to smart thinking, imagining this changing world and trying to understand its implications and opportunities, is a big part of what I do.

Whilst technology already plays an important role in our lives, as it continues to advance and we become increasingly addicted to its benefits, the boundaries between us (humanity) and it (technology) will become increasingly blurred. A topic explored in PHD’s latest book Merge.

One of the topics in Merge that really caught my attention was invisibles: A form of technology that is so integral to our lives, that it is no longer just an extension of us, but instead, it lives inside of us.

There’s a generation of biohackers who are already transforming themselves using micro-chips roughly the size of a grain of rice.

These tiny little micro-chips are being implanted into hands, enabling card free travel and easy access to places like the office or gym.

A company called Epicenter, a co-working space for start-ups in Sweden, already offers voluntary micro-chipping to its 150 employees, which enables them to open doors, use office technology like photocopiers and even pay for lunch at the office café with just the tap of their hand.

The key to our uptake of these micro-chips is rooted in our addiction to the utility and benefits that they provide. It’s the convenience that really appeals. I like to travel light – if I can go out without lugging around a bag or a purse, I will. Quite often all I take is my phone, with a few cards tucked away in the case. Being able to head out in the future completely hands free, sounds like the dream.

As soon as I found out that the micro-chips were available right here in Sydney through a company called Future Sumo, off I went to try it for myself.

I decided that if I was going to get it done, I may as well go all in, so I chose to get two micro-chips implanted, each with a different purpose: One RFID chip (radio-frequency identification) in my left hand, and one NFC chip (near-field communication) in my right hand.

The RFID chip is pretty straight forward. I got mine linked to my work access card, which means that I can open doors in the office, operate the lift and work the printer, by simply tapping my hand on the reader.

With the NFC chip, the options were a bit more limited. Whilst I wanted to connect mine to my Opal or bank card, I was told that there were a few issues with doing so.

Instead I decided to connect it to my LinkedIn account to use at networking events. All I need to do to make it work, is tap my hand against someone’s phone, and they’re taken straight to my LinkedIn page.

The NFC chip is easily updatable. Using a simple mobile phone application I can re-programme my chip to do a multitude of tasks and hold different types of information. From storing medical information to (eventually) being able to pay for stuff with a simple tap of my hand.

Getting the chips implanted:

The process itself was surprisingly quick and straight forward. Having watched a few videos online beforehand, I can safely say that it looks worse than it is!

Our lovely, professional piercer Tara was quick to put me at ease, despite us being her first human micro-chip implants (her previous test was on an uncooked turkey leg!). She reassured us that 12 years in practice and being a professional piercing trainer, meant that we didn’t need to worry.

The first thing she did was numb and sterilise the area, before repeatedly pinching the skin between the thumb and forefinger to break up the tissue.

Once the area has been prepared, there’s a short, sharp sting as the chip is inserted with a pre-loaded syringe. It’s not particularly painful and the feeling is pretty similar to a routine injection.

There was no blood at all and the mark that was left is no bigger than a freckle. It’s a little red, but I’m told that will go down in a few days.

One thing that did surprise me, was just how controversial a topic this was to everyone that I mentioned it to. It really divided opinion. Don’t get me wrong, I know it’s not everyone’s cup of tea and sure, I expected some level of hesitation, but there were a lot of questions:

Is it safe? Is it painful? Can you be tracked? Is it in there for good? Can it be hacked? Or as my sister so kindly asked, can someone hack it so that you constantly hit yourself round the face? …Afraid not.

In a future where this type of merge could happen at scale, there are some genuine concerns that will need to be addressed. Just as all technology comes with benefits, it also has its inevitable dangers and pitfalls.

Looking to the future:

For me, one of the most interesting aspects lies in the potential of implantable technology. Whilst today the uses are relatively limited, the possibilities for the future are infinite. From using the micro-chips to track everything that’s going on inside of our bodies to using it to control everything outside of them.

Imagine a day when we leave the office, hop in the car, drive home, enter the front door, cook dinner in the oven and boil the kettle for a cup of tea, all without needing to turn on a single switch, swipe a single card or turn one single key.

PHD’s new book ‘Merge | The closing gap between technology and us’ explores how technology and human evolution has progressed since the 1950s and what the world will look like over the next 25–35 years when humanity and technology become intrinsically linked. It’s available to download now from Amazon.