Speaking about the resignation of chairman Justin Milne on the ABC News yesterday, Strom said the broadcaster needs to reclaim its independent grounding and not pander to political agendas.

“It’s a clear revelation the ABC has become a political football.

Strom said “politicians ringing their mates up in the building saying they don’t like a reporter” can no longer be tolerated.

He added, “There needs to be a transparent way for anyone to make complaints and politicians have to be at an arm’s length.”

Asked what can be done going forward to rebuild the ABC, Strom said, “I think the inquiry is a good start.”

“We need to get to the heart of what’s happened here and stop politicians from thinking they have a hotline into the ABC.

“ABC’s independence needs to be armour-plated.”

Strom then criticised ABC’s board, citing the lack of media experience among the members.

“It’s quite alarming, the ABC board has very little experience in media.”

“With the current board there’s very little understanding of public broadcasting, and we need to know what they knew about the events unfolding this week,” Strom added.

“The board needs to have a strong understanding of what public broadcasting is and what it means to be in a modern Australia.”

Asked what qualities the next elected chairman should have, Strom replied, “a backbone”.

“They need to have a very strong backbone, be independent and have an understanding of the role of a public broadcaster.

“Recently they’ve mixed up public broadcasting with state broadcasting, they are there to reflect the country not to pander to political whims,” he added.

The MEAA posted a published a faux-job description of what the Alliance was looking for out of the next managing director of the ABC, following the ousting of Michelle Guthrie. 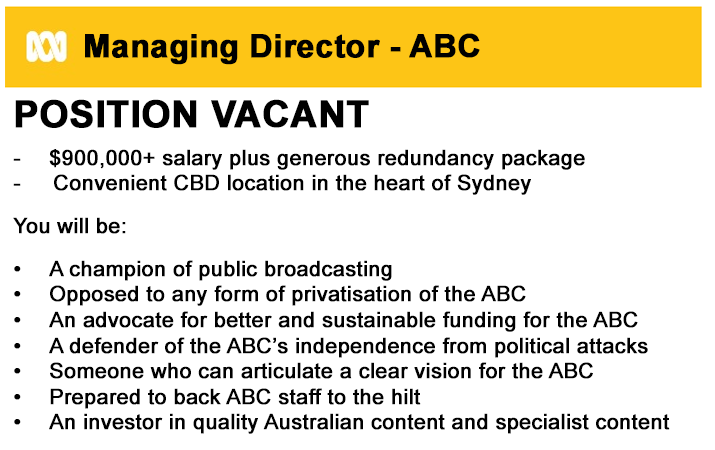