Hard Quiz host and comic, Tom Gleeson, has won the 2019 Gold Logie which he later joked he planned to turn into a tow bar for his Holden Monaro.

Announced last night (see the full list of winners at the bottom of this article), Gleeson’s win has been marred after pundits claimed he didn’t deserve Australian TV’s highest honour and there were more deserved recipients.

However, Gleeson was having none of the criticism of his win, using his eight-minute long acceptance speech to tell his detractors to “lighten the fuck up”.

During the speech, fellow Gold nominee, Amanda Keller (below), and even Gleeson’s wife, Ellie Parker, were seen squirming in their seats with media reporting Keller was so unimpressed she was seen giving Gleeson “death stares”. 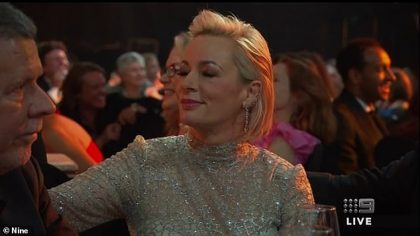 Gleeson began: “Just because all of you want it and I’ve got it, don’t get angry with me. It’s alright, you’ll all survive. It’s a shame this is the last Gold Logie that’s ever going to be handed out – according to Grant Denyer, I’ve ruined the Logies. But at least I won this all by myself.

“Turns out I’m just really good at manipulating the media into doing things for me. Which, if you think about it, is why we’re all here,” he continued.

“There’s been a lot of concern that I’m turning this award into a joke. This award has done a lot of great things for a lot of different people. In the past it has represented trying to get more diversity on the screen or launching charities and that’s fantastic. But for me it represents a joke, but I love jokes. I really enjoy them. I really think we should all lighten the fuck up.”

“The aim of my campaign was just to have fun with the whole thing. Because it all doesn’t really matter. It really doesn’t matter.

“We can have fun and just be entertaining. People get concerned about people campaigning for the award. Is that legitimate? Maybe. Maybe not. I don’t know. But it is social media. It is just media. I’m just trying to be entertaining through the media. Do you know what would have been weirder? If I campaigned for this award sincerely. That would have been worse. Imagine me just sincerely saying I was humbled by the award. I wouldn’t be able to live with myself. It would make me want to vomit.

“I’m taking it as a win for comedy because comedy to me is really important,” Gleeson railed.

He then dedicated the win to his favourite charity “Ticketmaster.com.au”.

Gleeson concluded: “If you go there you can buy tickets to my show at the Opera House. I would really like to see you there.”

And Gleeson’s win appears to have divided social media, with detractors claiming the annual event had “lost all credibility”, while Gleeson fans said his win was exactly what the dour event needed. Check out some of the rage (and praise below):

The full list of nominees and winners for 2019 are below (winners are underlined and in bold). For the record, the ABC was this year’s most awarded broadcaster: