In one of the more bizarre (see: vile) fast-food promotions in a LONG time, Burger King in Russia has offered any woman who gets impregnated by a player at the current World Cup three-million roubles ($A64,000) and a lifetime supply of Whopper burgers.

The Facebook promotion promised to reward women who get “the best football genes” and “ensure the success of the Russian team for generations to come”.

The campaign went live on Tuesday and lasted a mere 24 hours after universal outrage forced it to be pulled.

Burger King bosses immediately apologised and said it had removed all materials relating to the promotion. However, it is still circulating among Russian social network users.

The company posted a Russian-language statement on local network VKontakte saying: “We offer apologies for the announcement we made. It was too offensive.

“We are thankful for the feedback and want to inform you that we have already removed all materials related to the application.” 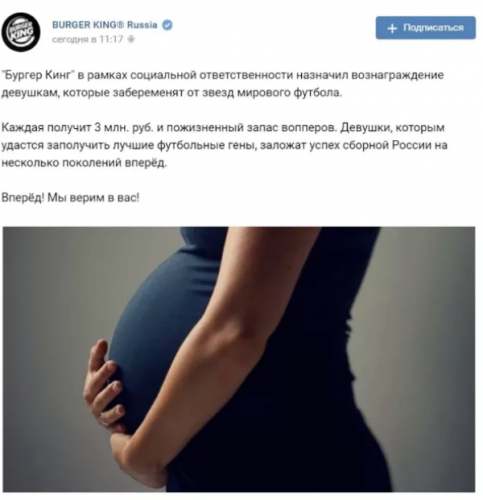 Unfortunately, Burger King in Russia has a long and sorry history of misogynistic advertising. Just last year it made fun of a teenage rape victim in an online marketing campaign. The fast-food company used the likeness of Diana Shurygina, who was raped when she was 16, as part of a buy one get one free burger offer.

The current furore follows a Russian MP who urged Russian women to have sex with visiting football fans and have children during theWorld Cup  tournament.

Mikhail Degtyaryov’s comments were made after one of his female political colleagues advised Russian women to avoid having relationships with visiting international supporters.

Tamara Pletnyova warned them to think twice before entering into casual relationships with foreign tourists because of the possibility they could fall pregnant and be forced to bring up children alone. Remind B&T what year this is again?