A new study has found that when it comes to leisure time, Australians favourite past time appears to be filling their stomachs.

According to research by Roy Morgan, in the year to March 2018 Australians went out for food and drink nearly 1.35 billion times at cafes, restaurants, fast food outlets and pubs – or an average of 66 times each by every Australian aged 14-plus That was up by an average of two trips per Australians since last analysed in September 2016. 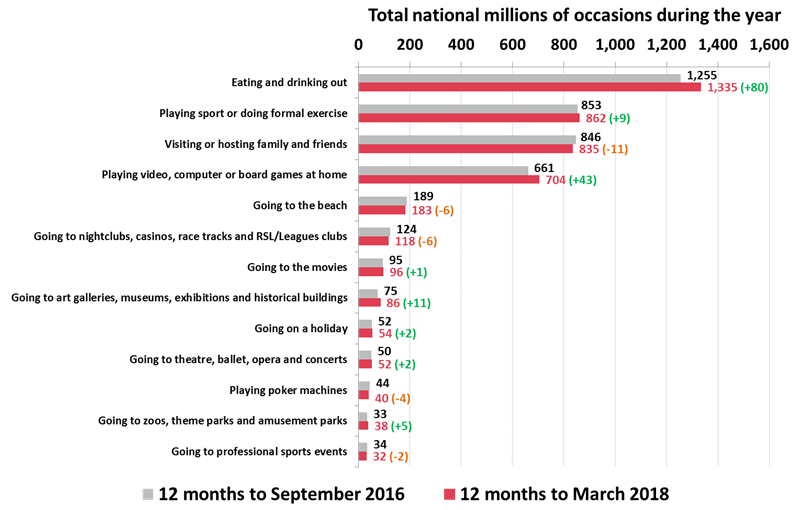 Other popular activities in the last year included playing sport or doing formal exercise done 862 million times by Australians and up slightly from the year to September 2016, and visiting or hosting family and friends done 835 million times, and slightly down over the period.

Increasing in popularity over the last 18 months including going to the movies, going to art galleries, museums, exhibitions and historical buildings, going on holiday, going to theatre, ballet, opera and concerts and going to zoos, theme parks and amusement parks.

In contrast there were several activities that declined in popularity including going to the beach, going to nightclubs, casinos, race tracks and RSL/Leagues clubs, playing poker machines and going to professional sports events.

A closer analysis of Australians’ travel patterns reveals Australians together took 54 million holidays during the year (over 2.6 each on average, although around three in 10 of us didn’t take any trips).

Australians spent an average of four nights away each time, for a total of 211 million nights on holiday of our total 7.4 billion available nights on holidays (or three per cent of our collective year).

Commenting on the results, Roy Morgan’s Michele Levine said: “The good news is that there are plenty of other activities Australians love to enjoy when not working, sleeping, or spending time on the Internet. The most popular social activity for Australians is eating and drinking out done a cumulative 1.335 billion times in the 12 months to March 2018 – up 80 million on the year to September 2016.

“As well as the increasing popularity of heading out for a nice restaurant meal or a social drink with friends, Australians are also increasingly playing video, computer or board games at home now totalling 704 million occasions and up 43 million since late 2016.