O’Sullivan said Tourism Australia’s job is about one simple thing: it wants to make Australia the most desirable and memorable destination on the planet. It’s about experiences.

“Those two adjectives are really really important. We’re about first-time visitation which is about desirability and then importantly we want people to come back because Australia is a complex destination,” he said.

“We’re a big expanse, we’ve got lots to see and do. A lot of people see Australia as a once in a lifetime, three-to-four-week week holiday, but we want them to come back in short sharp bursts.”

O’Sullivan said Tourism Australia’s strategy is not built around volume, but yield.

“Unashamedly, we took a position about eight years ago that we wanted our industry to be about spend and yield of customer. It’s great to have volume but we also have to have a commercial outcome as well,” he said.

“We have a notion of a high-value traveller. It’s someone we know has a desire to travel to Australia or abroad, they have great demand for the experiences that Australia has to offer and we know they’ll spend more, stay longer and come back. They are the strategic drivers of everything that we’ve been doing.”

O’Sullivan said the pure problem that Tourism Australia is trying to solve right now is getting people to keep coming back to Australia once they’ve visited, and the Crocodile Dundee campaign was a key part of achieiving that.

“The opportunity in North America is that Americans are travelling right now. The Australian industry has had a great story over the last eight years with mainland China, 1.4 million visitors,” he said.

“You can now fly from 17 cities in mainland China into eight cities in Australia.

“At the beginning of 2017, we thought that there was more to get out of the North American market and by comparison our share is not as good as it could be. We also know that Americans really like the experiences that Australia has to offer as a holiday destination.”

O’Sullivan said there was a number of conditions in Tourism Australia’s favour:

At the start of 2017, Tourism Australia sat down and decided if it was going to play in this market then it would have to play a little bigger than what it normally does.

“The problem we had is that the top 10 travel brands in America like Expedia spend on average the equivalent of Tourism Australia’s annual operating budget on marketing,” he said.

“If you weight that up, it’s about how do you use a platform that can talk to our target audience in the most effective way possible.”

“We did our research and it came up unequivocally that the Super Bowl was the right platform. What sold it to us [was] we knew that at least 50 per cent of our target audience would be consuming this content at the time of the game. That, for us, was an opportunity too good to refuse.” 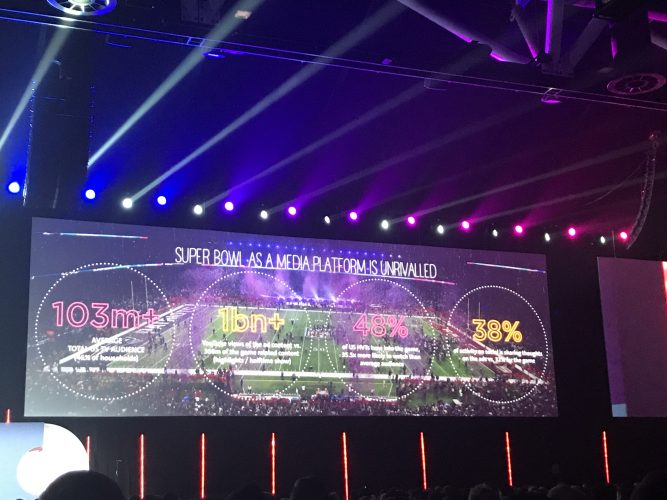 While Australia is known for its stunning geography, great food and wine, and unique wildlife, but O’Sullivan said the glue that holds it all together is the people.

“It’s the one thing that distinguishes us from the rest of the world,” he said.

“The message for America is you take those three experiences and the experiences around the Australian people, and it’s about making us a welcoming destination and getting some cut-through that we probably haven’t had for a number of years.

“If you look at what a lot of tourism boards do, and we’ve been guilty of this ourselves, it’s about these beautiful landscapes, classic music. At the end of the day, it goes through this kind of ‘sea of sameness’. And we needed to distinguish from that, and one of the key ways of doing that was around the people.

“What brought the campaign to life was our partners (airlines, trade, industry, media and technology). We had over 40 partners who continue to work with us on this project, there were over 100 NDAs signed. It’s been about using creativity to solve a strategic issue with great partners and using people as the differentiator.”

The Crocodile Dundee campaign remains the number one searched, shared and viewed Super Bowl campaign this year, with a media reach of 7.7 billion and 900 per cent increase in organic bookings.

“It’s really easy to do the same thing every day and feel comfortable. Sometimes taking that leap can produce something that’s out of the box,” O’Sullivan concluded.

If you work in travel marketing, make sure you get your tickets to the upcoming Travel DAZE conference on Monday 3 September, where Tourism Australia CMO Lisa Ronson will be speaking along with Airbnb country manager Sam McDonagh, G Adventures founder Bruce Poon Tip and many more.