The front page of News Corp’s The Courier Mail detailing the death of Mayang Prasetyo – calling her a ‘she-male’ – has been ruled “gratuitous” and “not sufficiently warranted in the public interest” by the Australian Press Council (APC).

The front page appeared on The Courier Mail early October last year, detailing the horrific murder of transgender woman Mayang Prasetyo with the words “Monster Chef and the She Male”. Throughout the spread the publication referred to the victim as a “ladyboy”, with references to the victim’s activities as a sex worker. 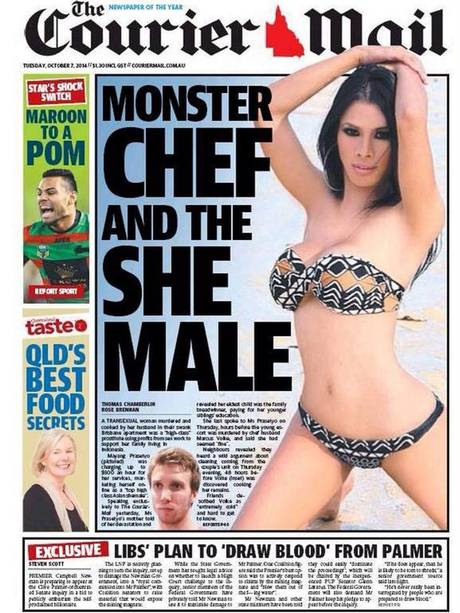 As per the report on the APC website, the publication said it believed the story was in the public interest as it was one of the more “gruesome crimes” in Queensland’s history.

The publication also said the victim referred to herself as “transgender” and “ladyboy”.

The pictures had been taken from the victim’s Facebook page, however The Courier Mail said they were images she had used to promote herself.

The Courier Mail had received a number of complaints from readers at the time, and in response, said in the APC document it had taken a number of steps to address the criticism, saying  it had “no intention of diminishing the value of Mayang’s life”, as well as publishing a number of articles the following few weeks addressing the issue.

Ultimately, the APC found The Courier Mail had breached the General Principles 3 and 6 of the Standard of Practice of the Council. Principle 3 states factual material is presented with fairness and balance, and Principle 6 states publications should avoid causing offence, distress or prejudice unless in the public interest.

The statement from the APC said: “The Council considers that the prominent treatment given to the victim’s gender, and the repetitive detail of her sex work, was gratuitous and contributed to the substantial offence caused by the terminology used to describe the murder victim. This was not sufficiently warranted in the public interest. For the same reasons, Ms Prasetyo’s death was presented in a manner that was not reasonably fair and balanced.

“Accordingly, the Council finds a breach of its Standards in relation to General Principles 3 and 6.”

However the APC did note The Courier Mail had responded to criticism and readers’ complaints with publishing prominent editorial the following day.

“The Council notes the steps taken by the publication to address the complaints and commends it for its work to ensure such issues are covered sensitively in future. Accordingly, in this aspect of the complaint, the Council finds no breach of General Principle 4.”

Principle 4 of the Guidelines states a fair opportunity for subsequent publication is offered to a possible breach of principle 3.