Aussie children increasingly prefer to wear sportswear labels such as Nike and adidas, and are turning off famed local surf wear brands such as Rip Curl and Billabong that are increasingly considered “uncool”.

A comparison study by Roy Morgan Research found that in 2007 some 46 per cent of childnre surveyed said Billabong was a “cool” brand. Fast forward to 2017 and that figure has plummeted to just 14 per cent.

Fellow Australian surf brand Rip Curl has also fallen out of favour: between 2007 and 2016, the proportion of Aussie kids who considered it cool fell from 33 per cent to 18 per cent.

Aussie-founded (now US-owned) Quiksilver also lost popularity, with just 15 per cent of kids including it on their cool list in 2016 (down from 28 per cent), while its sister brand Roxy suffered a similar fate (from 34 per cent to 14 per cent). Only five per cent of kids rate Rusty as cool now, less than a quarter of the 23 per cent who did in 2007. 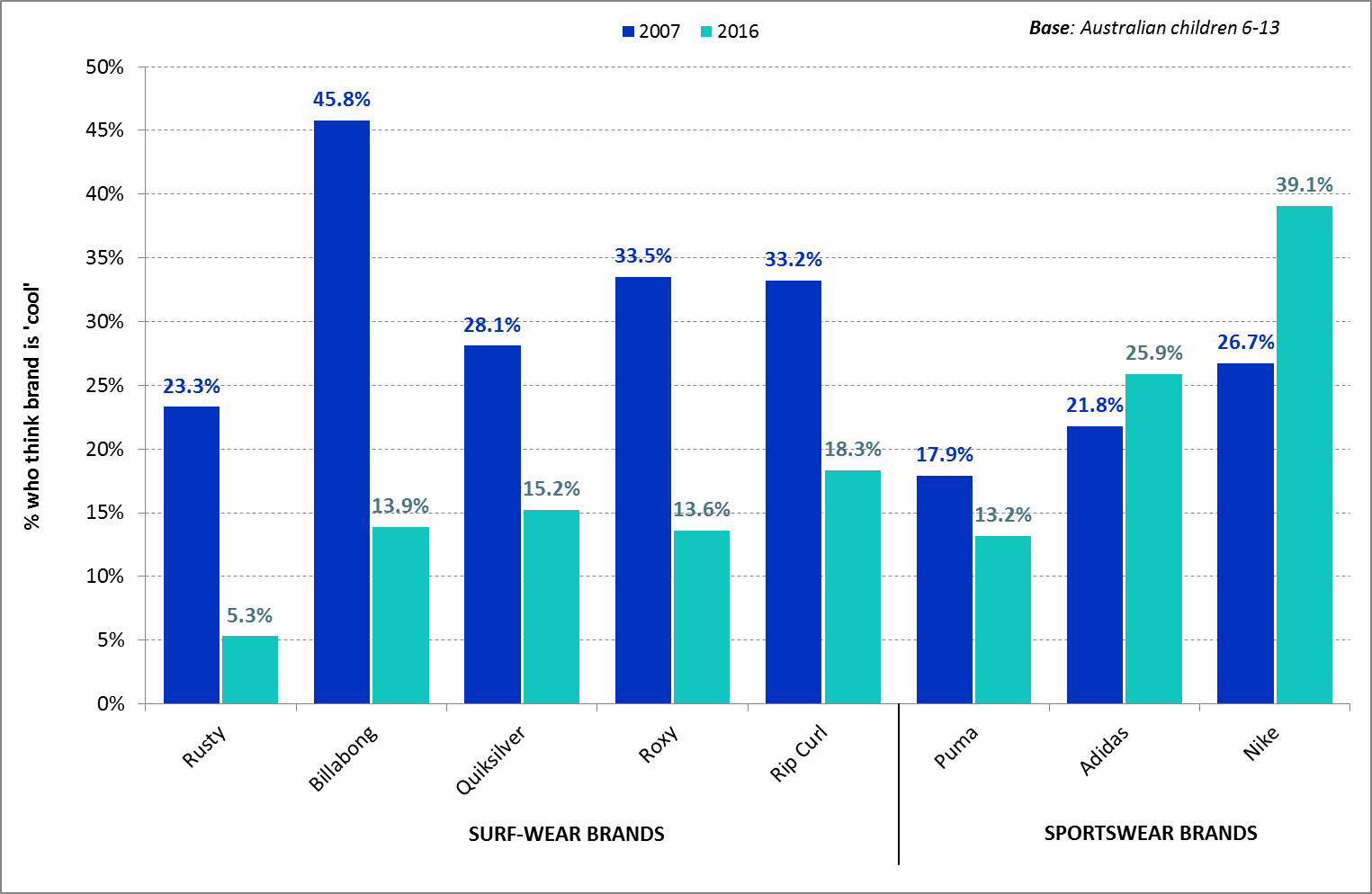 This decline in surf-wear’s cool credentials is evident among boys and girls of all ages, but the most pronounced downturn has been among girls aged between 10 and 13. For example, whereas 72 per cent of girls in this age bracket thought Billabong was cool and 79 per cent thought the same of Roxy in 2007, these figures have plummeted to 22 per cent and 30 per cent respectively.

And surf wear’s loss is athletic wear’s gain. Considered cool by 27 per cent of Aussie kids in 2007, Nike is now at 39 per cent. While adidas’s trajectory hasn’t been as steep, it now outstrips all five surf labels with 26 per cent of children rating it as cool (up from 22 per cent). Curiously, Puma hasn’t fared so well (slipping from 18 per cent to 13 per cent between 2007 and 2016).

Just as the cool status of surf-wear brands took its biggest hit among 10-13 year-old girls, sportswear’s most dramatic improvement was with this same group. An impressive 57 per cent of girls aged 10-13 agree that Nike is cool, up from 29 per cent in 2007; with 40 per cent feeling the same way about adidas (up from 25 per cent).

Commenting on the findings, Roy Morgan’s communications director, Norman Morris, said: “Whereas surf labels like Billabong and Rip Curl used to be about as cool as it got with Aussie kids, Roy Morgan data shows that this is no longer the case. Those in the apparel trade will know that this is consistent with a wider slump for surf wear, which has struggled (along with many other local clothing retailers) to compete with the influx of cheap’n’cheerful international retailers such as H&M and Topshop.

“Furthermore, surf culture in Australia has moved so far from its rough-and-ready roots that it’s now part of the mainstream, with even former PM Tony Abbott hitting the waves. On the other hand, Nike and adidas are benefitting from the current athleisure craze, with kids (especially girls) clearly responding to sportswear’s popularity with fashionistas around the world. Nike’s relationship with actor-comedian Kevin Hart and adidas’ association with singer Kanye West undoubtedly add to these labels’ desirability, even among children.