The Sydney Swans are the most supported team in the AFL boasting 1.174 million fans according to the annual Roy Morgan AFL supporter ladder.

But it was the fourth placed Adelaide Crows that was one the biggest improvers, adding 14.6 per cent more fans or 620,000 over the past 12 months.

While 2016 premiers the Western Bulldogs increased its base by a phenomenal 42.1 per cent year on year to boast 351,000 fans. 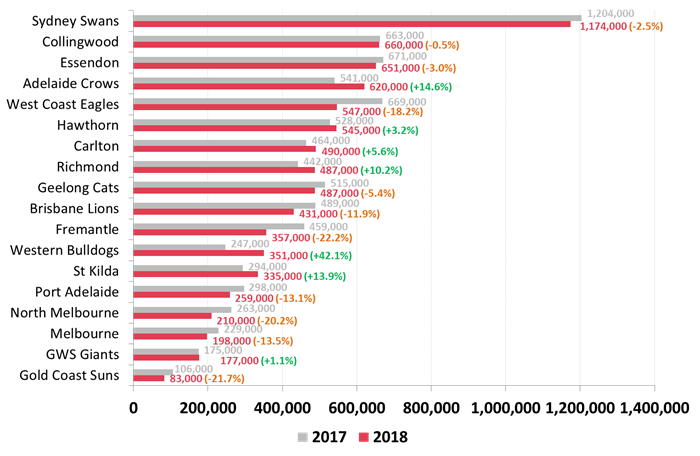 Although it is no surprise to see the traditionally well-supported clubs such as the Sydney Swans, Collingwood, Essendon, Adelaide and West Coast at the top of the overall AFL club supporter ladder, a key metric for AFL clubs is their ability to convert their latent support into financial members that directly benefit the clubs. 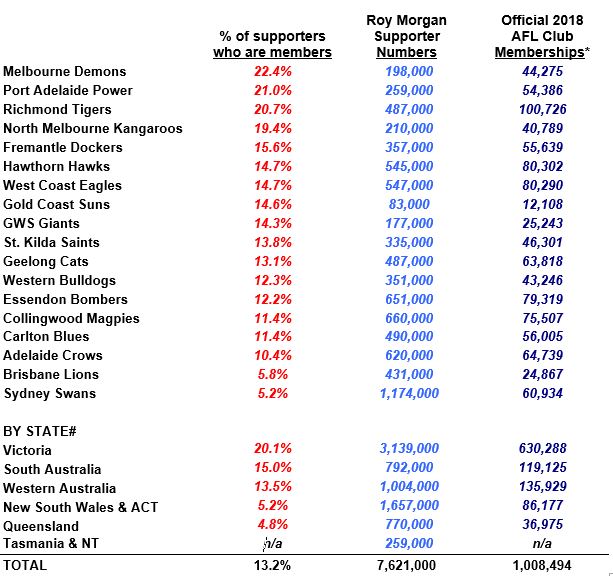 The table above ranks clubs based on how effective they are at converting their supporters into financial members based on dividing the (official AFL club memberships divided by Roy Morgan supporter numbers) x 100.

Richmond’s staggering 2018 membership of over 100,000 – the first time any AFL club has signed up a six-figure membership – means the reigning Premiers now have the league’s third best supporter to membership conversion rate of 20.7 per cent well ahead of the other traditional ‘Big 4’ clubs.

“However it is the recent success of the Western Bulldogs, Richmond and Hawthorn that highlights the importance of on-field performance to growing the supporter base in the stands.

“The Western Bulldogs drought-breaking Premiership in 2016 has resulted in a surge of support for the club now at 351,000 and up a stunning 42.1 per cent from a year ago while reigning Premiers Richmond increased their support by 10.2 per cent to 487,000.

“In terms of passion – Victoria remains the beating heart of the AFL with over 3 million supporters buying around 630,000 AFL club memberships in 2018 – a conversion rate of 20.1% of supporters to members ahead of South Australia (15 per cent of supporters become members) and Western Australia (13.5 per cent).

“The high conversion rates of supporters to members underpin the AFL’s strong attendances. In 2018 there are 7,621,000 supporters of an AFL club around Australia and with two rounds of the home & away season to go AFL attendance so far sits at a total of 6,270,730.

“These aggregate attendance figures suggest the AFL is well on track to break the all-time home & away attendance record set last year of 6,734,062.”