Advertise with us
Posted 6 December, 2016


As revealed on B&T today, Amazon is the latest competitor to enter the hotly contested grocery market. However, if a new study into the grocery shopping habits of Aussies is to be believed then the facts are we still prefer a trip to Coles and Woolies.

According to the latest study by Roy Morgan Research, only three per cent of Australians did their grocery shopping online in any given four-week period in the 12 months to June 2015. That was up from 1.4 per cent the year previous.

Not that we’ve dismissed the concept entirely, with some 26 per cent agreeing that they would “consider doing some of my grocery shopping on the internet in the next 12 months”.

And when it comes to the most popular grocery home delivery service it’s a badly needed win for Woolies. Some 237,000 Aussies say they “mainly or sometimes” get their groceries home delivered by Woolworths. Coles laid claimed to 180,000 regular users and Aussie Farmers Direct was third with 140,000. 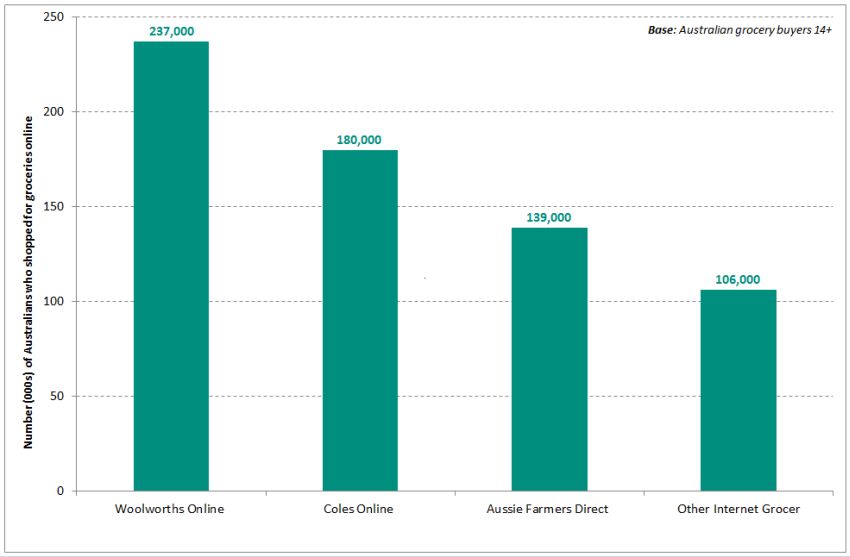 The rest was made-up by smaller players (who namely delivered dry goods, not fresh) such as GroceryRun, Indo-Asian Grocery Store and a multitude of smaller players. This group represented 106,000 local users.

Commenting on the study, Roy Morgan CEO, Michele Levine, said: “The great disparity between the proportion of grocery buyers who say they’d consider doing their supermarket shopping online in the next 12 months, and the proportion who actually go on to do so, speaks volumes about the state of online grocery shopping in Australia. While consumers are clearly not opposed to the idea, they seem to be having trouble putting it into practice.

“One of the great things about online shopping in general is its convenience, but when it comes to groceries, this isn’t necessarily the case. What with all the scrolling, searching for products by key words rather than spotting them on the shelves, being organised enough so you know exactly what you want rather than grabbing items as you see them, it can be quite a challenge!

“But with the rumoured entry of US e-commerce colossus Amazon into Australia, will consumers be converted to online grocery shopping once and for all? Speculation is already rife about the ramifications of an Amazon expansion Down Under, with the local grocery market (both online and in-store) being just one retail sector that stands to be disrupted. It will also be interesting to track the success of Woolworths’ recently announced partnership with Australia Post to install more than 500 parcel lockers for their ‘Click-and-collect’ services, providing an extra 24/7 delivery option for their online customers.

“As our latest State of the Nation report reveals, there were some significant shifts in Australian retail last financial year, with supermarkets and other grocery retailers seeing their fair share of change. No doubt, the coming 12 months will bring even more developments. Whether a move to online grocery shopping is one of them remains to be seen,” Levine said.