Admittedly, it was a bit of a two-horse race this year after Ten’s abysmal 12 months, but Channel Seven has again claimed the ratings bragging rights for the eleventh consecutive year.

The official ratings season wrapped up last Friday with Seven achieving an average audience share of 20.1 per cent (down 0.7 per cent from 2016), narrowly pipping Nine’s 20 per cent (up 1.6 per cent) according to OzTAM data. This did not include any of the catch-up networks.

Over the 40 official weeks in the ratings calendar, Seven laid claim to 22 wins, while Nine had 18.

Most watched TV series for 2017 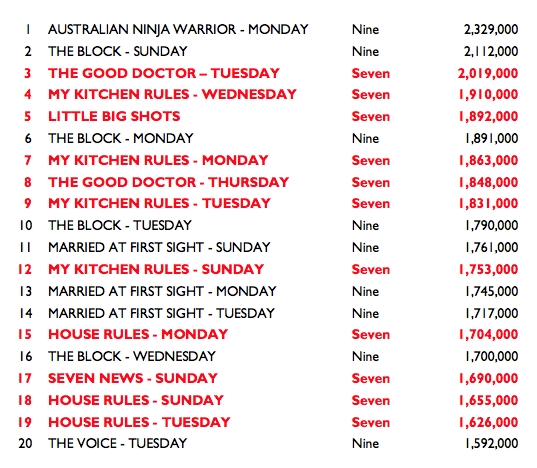 Most watched event series for 2017 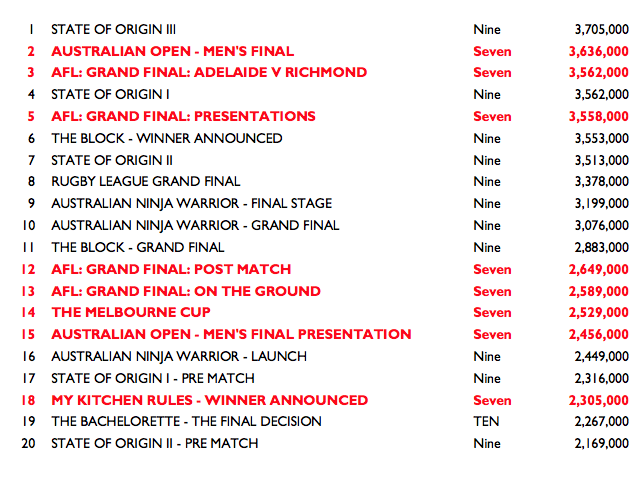 Seven’s director of programming, Angus Ross, said of his network’s win: “We move into 2018 after confirming our leadership for eleven consecutive years. We have leadership in breakfast and morning television, news and primetime. We have strong franchises coming back. We have a deep and strong slate of new programmes for 2018. We have the biggest sports events. We are looking forward to growing our audiences and reaffirming the undeniable audience delivery of free to air television.”

Michael Healy, Nine network director of television, said: “Making engaging content that entertains, informs and stimulates is at the heart of what we do. We are enormously proud of the slate we put to air in 2017. We will continue to push ourselves even harder to produce innovative television that can be enjoyed by viewers on a device and at a time of their choosing.”

Michael Stephenson, chief sales officer, said: “Before the start of 2017, we made a promise to the market that we would grow our audience in thousands and share, and ensure the consistency of our schedule throughout the year.

“I’m pleased to say we have achieved this across the board this year, winning all the key demographics on the back of strong franchises like Married at First Sight, The Voice, Australian Ninja Warrior and The Block. These shows are all proven performers that will again deliver strong audiences across the key demographics throughout the year in 2018.

“Marketers want partners they can trust to deliver results and at Nine are confident that we will have another strong year in 2018 with growth in the demographics that matter and continued consistency of schedule.”

Network Ten chief executive officer, Paul Anderson, said: “Consistency and innovation in our content and the distribution of that content were the hallmarks of Network Ten in 2017.

From Sophie Monk in The Bachelorette Australia and Casey Donovan in I’m A Celebrity…Get Me Out Of Here!, to the summer television season that is the KFC Big Bash League and the enduring success of MasterChef Australia, 2017 was a year of solid achievements for Ten. Many of our key domestic shows increased their audiences this year – across all screens – and our online and social media channels powered ahead.

“From Gogglebox to Australian Survivor to The Project, we will continue to commission, create and run content that engages deeply with our audience across all screens, is brand- safe and, most importantly, is advertiser-friendly.”