You can read the results in full here.

Some 15.9 million Australians 14-plus now read or access newspapers in an average seven day period either in print, or online via website or app – ‘cross-platform’.

These are the latest findings from the Roy Morgan Single Source survey of 50,139 Australians aged 14-plus over the 12 months to December 2017. 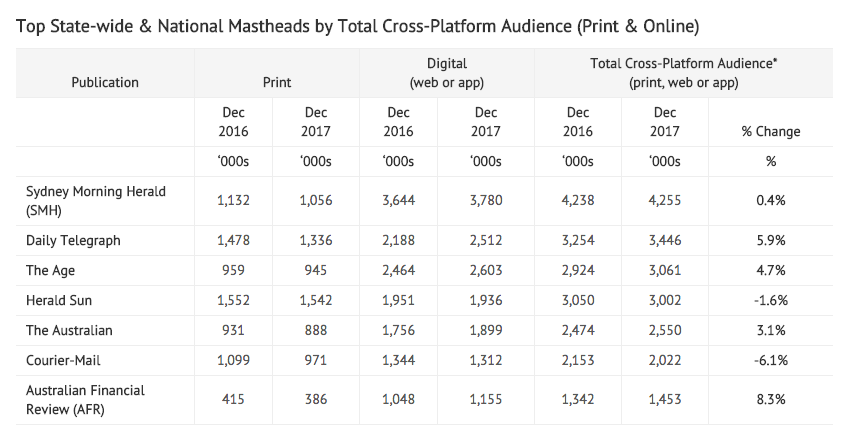 Australia’s two leading national mastheads experienced strong cross-platform audience growth with The Australian up 3.1 per cent to 2,550,000 and the Australian Financial Review growing even faster, up 8.3 per cent to 1,453,000.

Weekend newspaper readership down, but AFR Weekend and The Saturday Paper up

Relative newcomer Stellar increased its print readership by an impressive 19.8 per cent to 1,052,000 in the year to December 2017, but despite a decline in readership Good Weekend remains Australia’s most widely read newspaper inserted magazine with print readership of 1,199,000 (down 10 per cent).

Other newspaper inserted magazines failed to match the performance of Stellar with Sunday Life on 702,000 (down 11.1 per cent) and the Weekend Australian Magazine on 683,000 (down 2.8 per cent).

The Newcastle Herald is the star performer amongst Australia’s regional weekday mastheads in 2017 growing print readership by 7.6 per cent to 85,000 over the past year. The Newcastle Herald was the only leading regional weekday masthead to grow print readership in 2017. The Gold Coast Bulletin with 54,000 readers was down 11.5 per cent and the Canberra Times with 50,000 readers down 3.8 per cent.