For some people, accumulating advertising material in the form of mailers and product brochures can at times be irritating. But Melbourne-based creative startup Gag Brochures has a different take on it; selling product brochures to people for money.

Aimed at becoming a laughing point around the office or at the next gathering among friends or family, the catch of course is that the products featured within are completely fictitious

With this in mind it may not be such a bad idea to exercise higher-than-normal vigilance this coming April Fools’ Day.

“To avoid any confusion, the clue’s in the name,” said founder Ollie Thorne, a former advertising copywriter and creative who reached his light bulb idea of selling fictitious brochures after being forwarded an article that outlined genuine products that appeared both sloppy and redundant.

“When I started thinking up some other potential products that had my friends laughing I knew there could be something here,” he continued. “The hardest part was finding products that would play off social etiquette in a funny way but also be slightly believable. That way people would at first be confused – then be able to laugh about it afterwards”. 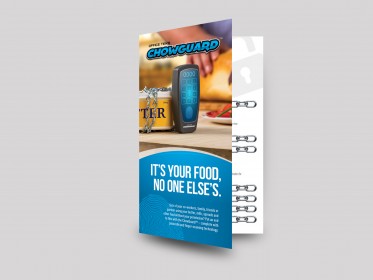 Mixing online with offline behaviour, buyers visit GagBrochures.com to choose the brochure design they want. It’s then sent along with a realistic-looking, fake-branded envelope to the buyer – ready to be gifted in person to an unsuspecting victim. Once received, the recipient begins to follow the redemption instructions online – but are then quickly alerted that it’s a joke.

The themes of the brochures are mixed. From a bathrobe-inspired tuxedo that can be worn at weddings and formal occasions – to a device that can shield a person’s lunch from potential employees or lunchtime gawkers.