The Heart Foundation has finally decided to pull its controversial “Heartless Words” campaign after a ferocious social media backlash.

The social media campaign arrived last Tuesday and basically inferred people who didn’t look after their hearts, and subsequently died of heart disease, didn’t love their loved ones.

B&T’d love to show you the offending ads, but they’ve been removed from The Heart Foundation’s Twitter page and from YouTube.

Created by its incumbent creative agency Host/Havas, the campaign was immediately pilloried as “heartless”, “cruel” and “plain nasty” by people who’d viewed it online, many having lost loved ones to heart disease.

By Wednesday, The Heart Foundation management agreed to alter the ads, removing a particularly controversial scene where a mother, who’s putting her young son to bed, says, “Every time I told you I loved you I was lying – you are not my priority.” 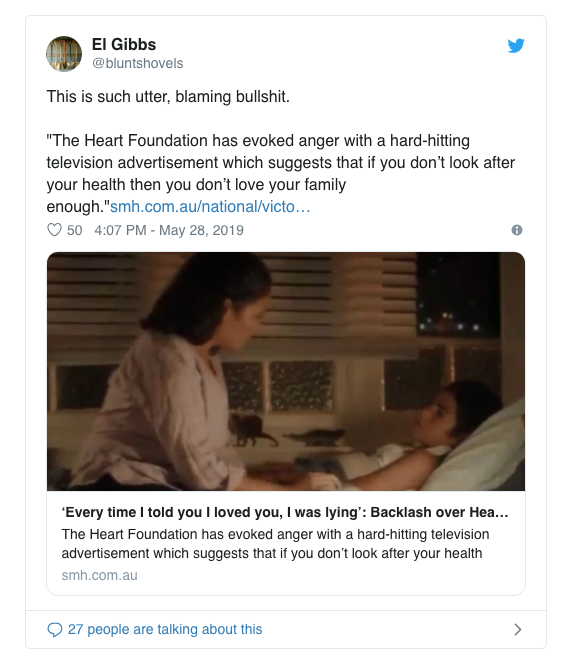 At the time, Heart Foundation Victoria chief executive Kellie-Ann Jolly publicly apologised for offending anyone, but stood by the powerful message the ads were trying to convey.

However, over the weekend, the organisation caved into public pressure – namely from people who threatened to stop donating – and pulled the spots altogether.

Heart Foundation board chairman Chris Leptos said: “To all the people who have been offended by our campaign, we apologise, and to all those who provided their feedback, we have listened.”

Heart Foundation chief medical adviser Professor Gary Jennings telling the ABC that the Foundation acknowledged “it’s a very traumatic thing to lose someone to heart disease … and it brought back memories to people.

“The Heart Foundation has decided to withdraw from this campaign because of the reaction they’ve received from several quarters in the media and in the community that perhaps the call went a little bit too far and has upset too many people,” the Professor said. 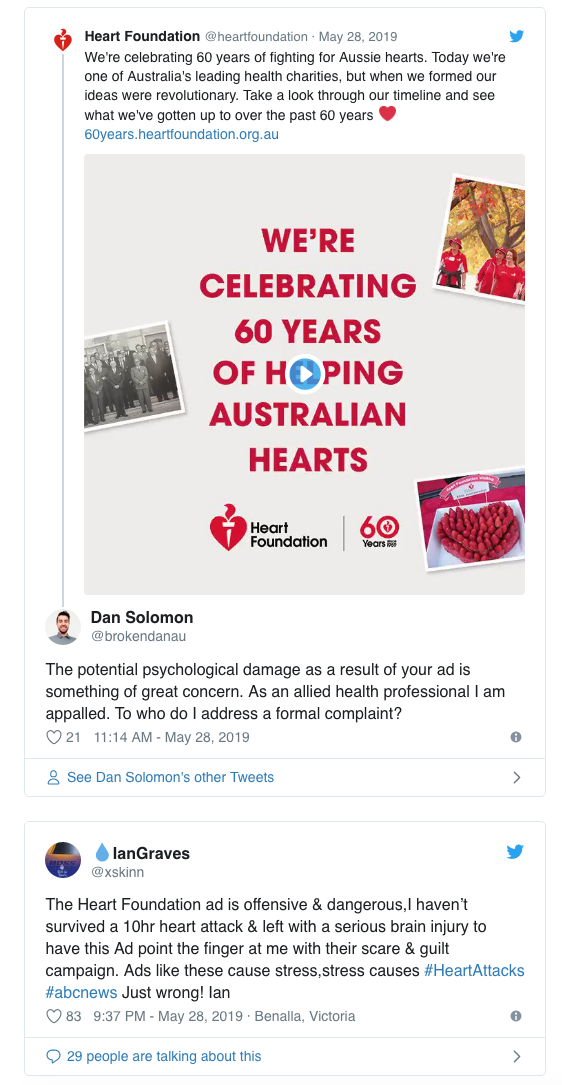 The other problem for the campaign was that it had been largely rounded-on by health professionals, too.

Australian of the Year and mental health professor Patrick McGorry tweeted: “So people are to blame for their illness? That’s been precisely the basis for stigma in mental illness and addictions. “Same for suicidal patients in EDs where they are blamed and put to the back of the queue.”

Dr Nigel Stobbs tweeted: “This disgrace has actually been made a pinned tweet. It’s beyond belief that the Board of Directors of the Heart Foundation would have signed off on this campaign. The trauma they are causing to survivors and families is incalculable.”