Swiss chocolatier Milka has found itself up the proverbial chocolate river without a paddle after a casting call for its upcoming Christmas ads specifically called for no redheaded or fat children.

The ad, posted by London-based acting agency Spotlight, called for a “beautiful and angelic” girl aged between nine and 11.

Posted on Twitter, the ad specified that the successful applicant could be no taller than “four foot four inches (1.3 metres)” and must have “soft hair”.

And then this clanger: “Eye colour and hair colour is not important but no red hair.”

Although it didn’t directly call out fat kids, the ad included the line, “She must be small and very childlike.” 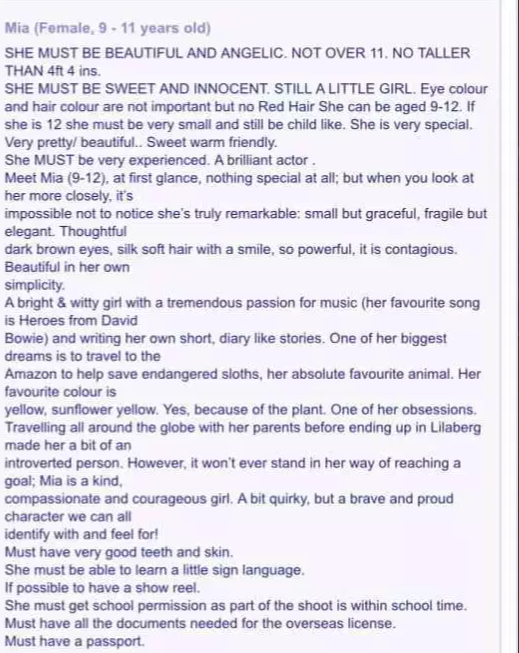 The ad was quickly called out on social media, with actress and comedian Kathy Burke leading the attack.

“Well this is disgusting and a fucking embarrassment to our profession,” Burke railed in a tweet. “Imagine being the kids that don’t get the job – you’re just not beautiful enough I’m afraid, my darling, now off you pop and be riddled with insecurities for the rest of your life.”

Burke then signed off with “fucking wankers”.

And, as it tends to happen, the apologies were soon flowing thick and fast. Not only from Spotlight but also from Mondelez International (the makers of Milka).

A Mondelez spokesperson telling the UK’s The Daily Star: “We take our advertising responsibility very seriously and this is not representative of the brief we shared with the casting agency and does not meet our high standards.

“We would never approve the use of such a notice, and are urgently reviewing the situation with Spotlight UK to understand how and why it has happened.”

A spokesperson for Spotlight said that the “ad had slipped through the net” and “absolutely did not meet our high standards”.

“On this occasion we failed to meet our own standards and we’ll be conducting a full review to make sure we get it right in the future,” the spokesperson said. “We made a serious error and we should have done much, much better. We’re sorry.”