Fairfax Media has introduced a new ad campaign that targets thinkers of the independent variety, particularly drawing attention to the strong editorial voices of The Age and The Sydney Morning Herald.

The ‘Independent News for Independent Thinkers’ campaign, created alongside With Collective, features “provocative imagery and copylines” referencing the people and issues making the headlines.

It dives into the various arenas covered by Fairfax journalism, including investigative realms, business, politics, sport, lifestyle and more. Here’s an example: 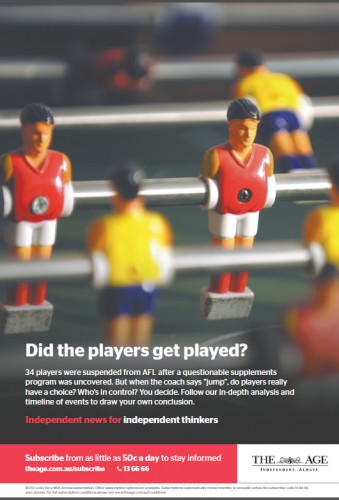 The campaign launched across The SMH and The Age today and will extend into out-of-home in Sydney and Melbourne over the coming weeks.

“‘Independent News for Independent Thinkers’ grabs people’s attention and focuses their mind on the big news and issues – it reminds them that The SMH and The Age are valuable and trusted sources of information,” editorial director Sean Aylmer said.

“Our journalists drive the conversations that matter in our communities through the powerful, independent journalism they deliver. They are the trusted voice for millions of readers who value knowing the full story.”

Fairfax said it’s all about big imagery and bold copylines with the new marketing direction, which also extends the life of Fairfax’s ‘Independent. Always.’ tagline which launched in 2013. Here’s another example: 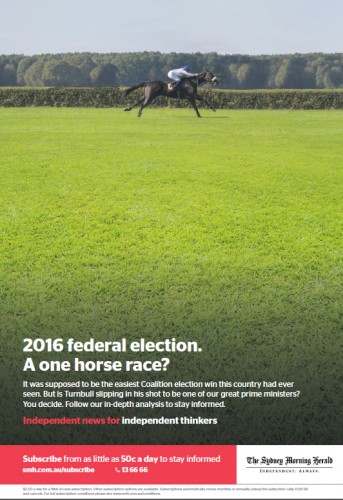 Customer marketing and growth director for The SMH and The Age, Michael Laxton, added, “The campaign aims to validate our readers’ decision to subscribe to our mastheads and reaffirm the access they get to quality journalism and exclusive subscriber-only events and benefits.

“The SMH and The Age subscribers now have access to exclusive content, video, events and premium benefits on new subscriber hubs which launched today.”