Did you sit transfixed to the telly last night as Scott Morrison handed down his first budget and his last before the coming federal election? Or were you too busy miming to Lyp Symc Battle on Nine?

So who exactly was tuning into all of last night’s tax cuts and superannuation hikes? Well, according to data released by Facebook this morning last night’s news out of Canberra proved hugely popular among men aged 35-44.

The social media behemoth has crunched the numbers of who was posting pre- and post-budget and the results have been published by Fairfax Media this morning.

According to the data men aged 35-44 were most likely to post about the budget while most of the comments – both male and female – were, as you’d expect from a social media site, from users aged under 44.

According to Fairfax, the results were based on the data of 14 million Australians who are regular users of Facebook and analysed their behaviour from 7.30pm to 2.30am this morning.

The most interested state and territories in last night’s events were the ACT, followed by Tasmania and the Northern Territory. This was despite the NT’s treasurer, David Tollner telling ABC Radio this morning that there was little in it for Territorians and included “no big ticket items”.

NSW came in fourth as the most tuned-in state and (the submarine dependant) South Australians were fifth. Victoria and West Australia were least interested in Scott Morrison’s financial musings.

The most trending terms were Scott Morrison (obviously), tax cuts, the PM, winners and losers and small business. All are outlined in the graph below. 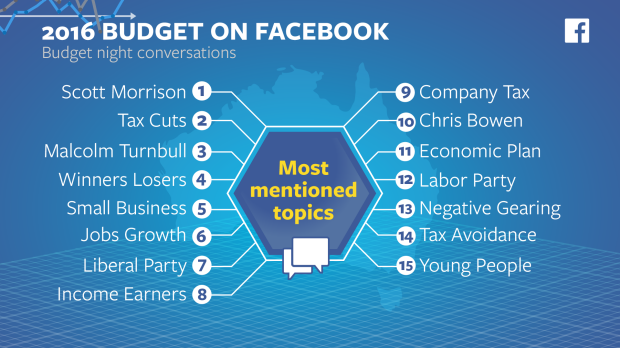 When it came to the top conversations, they were typical of budget speak and included the following: 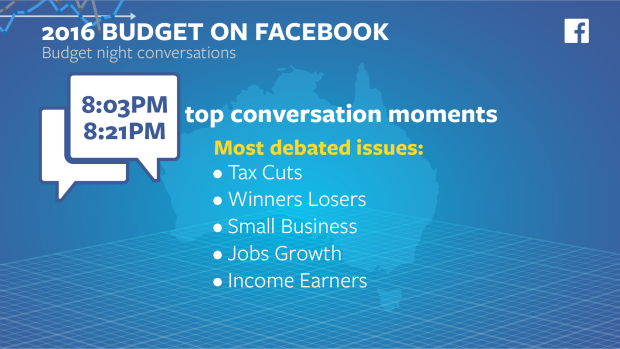