Introducing the interview in a voiceover, Wooley said: “I’ve met a lot of Prime Ministers in my time, but none too young and not so many so smart, and never one so attractive.” So it’s unclear if Ardern even heard the remark.

The 37-year-old Ardern became prime minister last October on the back of a left-leaning and nationalist agenda. She recently attacked media for questioning her ability to govern while pregnant.

Viewers were quick to take to social media to register their disgust at the comments and slam Wooley for a “repugnant” and “patronising” interview. 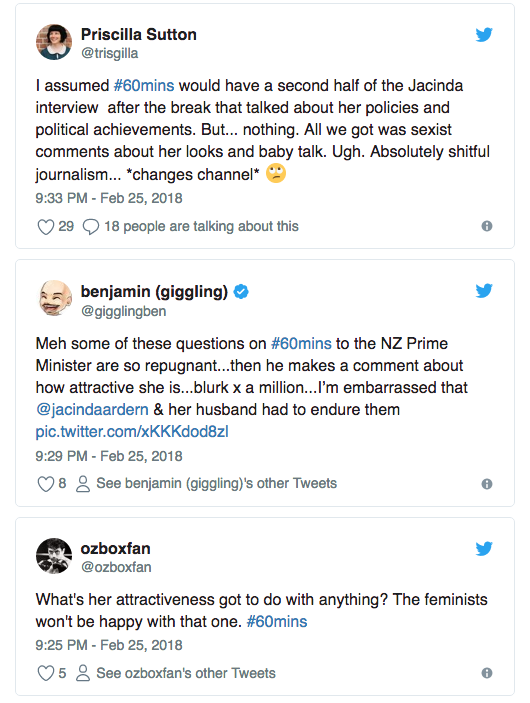 “Charles Wooley interviewing Jacinda Ardern on 60 Minutes would have to go down as the most patronising interview for a long time,” one viewer wrote. “‘I’ve met a lot of Prime Ministers in my time, none as good looking’. Imagine a woman reporter saying that about a man?”

Another adding: “Some of these questions are so repugnant… then he makes a comment about how attractive she is. I’m embarrassed that Jacinda Ardern and her husband had to endure them.”

Wooley then went on to question Ardern about her pregnancy, suggesting to the prime minister that the baby may have been conceived on the night of her election win.

Wooley said: “It’s interesting how much people have been counting back to the conception date.” Ardern laughed the comment off before adding that the baby was conceived when the election was over and “not that we need to get into those details”.

In a statement to B&T, a Nine spokesperson said: “In its 40 years on-air, 60 Minutes has always been renowned for its political interviews conducted without fear or favour.

“In interviews with various world leaders including Bob Hawke, Margaret Thatcher and current Australian PM Malcolm Turnbull, 60 Minutes reporters have always asked the tough questions which the public has been wanting to hear, while also showing the human side of these individuals that we rarely get to see.

“Charles Wooley came away from his interview with Jacinda Ardern in awe of her poise, intelligence and everyday charm, which was reflected in the full story.”