We all know life is just a big popularity contest to see who has the most Instagram followers and best responses to their red carpet outfit. And now, there’s data to show us who really leads the pack.

YouGov, the leading global polling and research firm, polled a total of 31,000 people across 30 countries to see who the most admired person in the world is, as well as the 20 most admired men and women in each respective country for 2016.

Bill Gates and Angelina Jolie sit at the top of the food chain, after being voted the most admired man and woman in the world. Gates was followed by US president Barack Obama and Xi Jinping, president of the People’s Republic of China.

In the ladies list, beloved Queen Lizzy II and Hillary Clinton rounded out the podium finish.

Russian President Vladimir Putin is the biggest riser since 2015, moving from 11th to 5th overall. Stephen Hawking, boosted by box office hit biopic The Theory of Everything, rises to 5th place from 9th worldwide.

Even bloody Trump makes an appearance at number 18 in the world, a sad reflection of where this planet is heading. But dear old Obama and his first lady Michelle remain the most admired man and woman in America’s own list.

Malala Yousafzai is the biggest faller on the women’s side, however this indicates less a fall out of admiration than a fall out of the news. In Sweden, the country which awarded her the Nobel Peace prize in 2014, she ranks first, and in Britain, Norway, India and Pakistan she ranks second.

The world’s top 20 most admired men and women are in the below table: 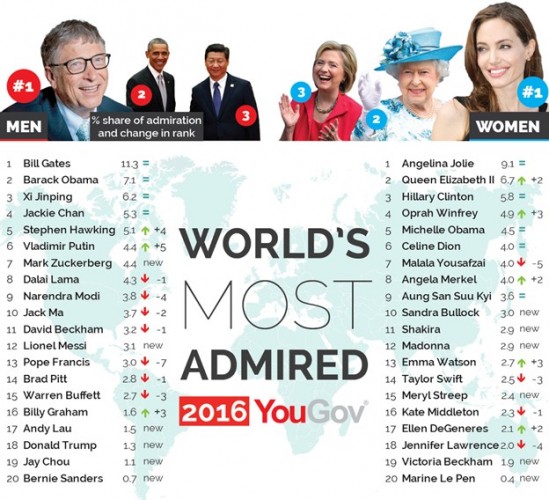 In Australia’s list of most admired men and women, we listed people like the Dalai Llama and Barack Obama, Queen Elizabeth II and Burmese social democratic politicna Aung San Suu Kyi as our most admired.

Aussies featured far lower down the list, and included names like Hugh Jackman, Tony Abbott, Malcolm Turnbull, Julie Bishop and Julia Gillard. With the exclusion of Hugh Jackman, it seems we don’t think any other Aussies outside the political circle are worth our admiration.

But don’t worry, Shakira still shimmied her way into our top 20 women. 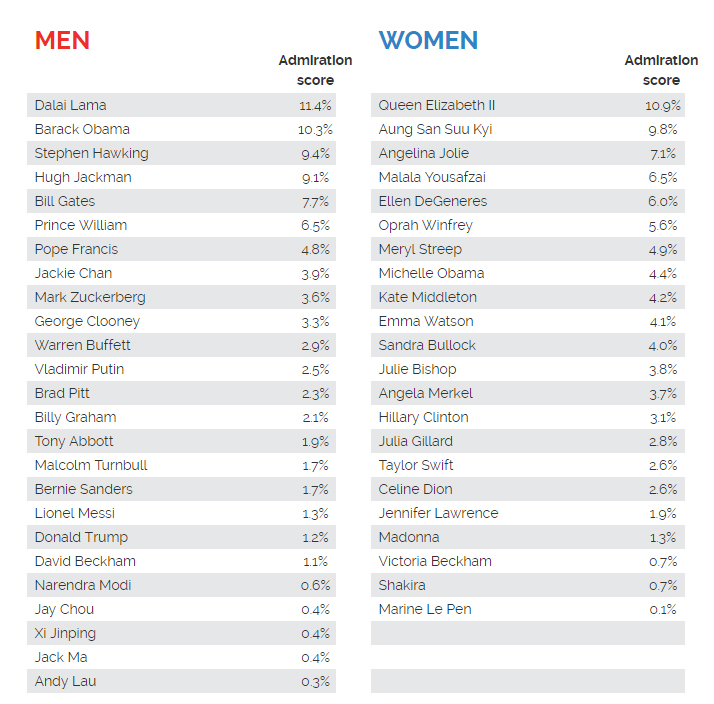