On Wednesday, Verizon Media’s branded content arm, RYOT Studio, invited 150 attendees to The Venue in Alexandria to experience the future of immersive media.

Following a successful format of similar events in the UK and US, guests were fully immersed in a narrative-led, four room theatrical performance that demonstrated RYOT’s dedication to engaging storytelling.

Pre-event, guests were kept in the dark on specifics and given the location in an AR enabled invitation.

Upon arrival, they were fooled into thinking it was another ‘death by powerpoint’ presentation but a fire alarm abruptly interrupted proceedings and attendees were ushered to a fire assembly point where the real tour began.

Beginning in the Briefing Room, guests watched as two actors dramatically searched for the creative brief amongst a tower of boxes. 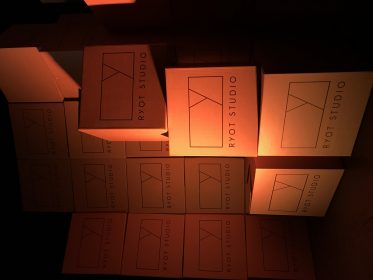 Then ushered into the Listening Post where a pair of ‘blind’ actors explained how they listen in to audience data to extract insights.

Taking that insight on a USB, the group put on hazmat suits and were led into the Imagination Chamber.

Here, they watched a ‘creative’ plug in the USB and laid to rest as he dreamt up the big idea.

Guests watched as his dream came alive and was projected onto the wall above.

The creative concept evolved into a storybook that was inserted into an ‘innovation engine’ to decide on the final format, video.

Lastly, in the Distribution Room two actors mixed various audience segments together in a science experiment to find the right audience at the right time.

Following RYOT’s unique approach to the creative brief, guests were encouraged to interact and immerse themselves in each of the rooms.

The tour ended in a final art gallery themed space for networking, drinks and an opportunity to view tangible examples of RYOT work in play, with campaigns for Kim Crawford, Flight Centre, Marks & Spencers, Youfoodz and New Caledonia on display.

“We leverage Verizon Media’s platforms and audiences to tell new and exciting customer-centric stories and experiences.

“In the fight for attention, brands need to become smarter in the way they craft their stories.

“By putting on a ‘show’ instead of a ‘tell’, we showed firsthand just how RYOT Studio is revolutionising the way content is created, communicated and distributed.”

Head of Production: Will Herman