It’s not unusual to see a child’s fascinated little face watching the TV screen in amazement. TV is still the top entertainer among young audiences.

However, reaching the hearts and minds of today’s youth is an ongoing challenge (and opportunity) for content providers and advertisers alike, who must factor in kids and teens’ increasing access to more devices and savvy consumption of digital content.

Findings from the Nielsen Australian eGeneration Report show that connected kids and teens (youth aged 2-15 years who use the internet) are so sophisticated that the majority of them (74 per cent) multi-screen (watch TV and use the internet at the same time). In fact, more than a quarter (28 per cent), have used three or more screens at the same time. There are more online kids under the age of 10 who engage in multi-screen behaviour, than those aged over 60. 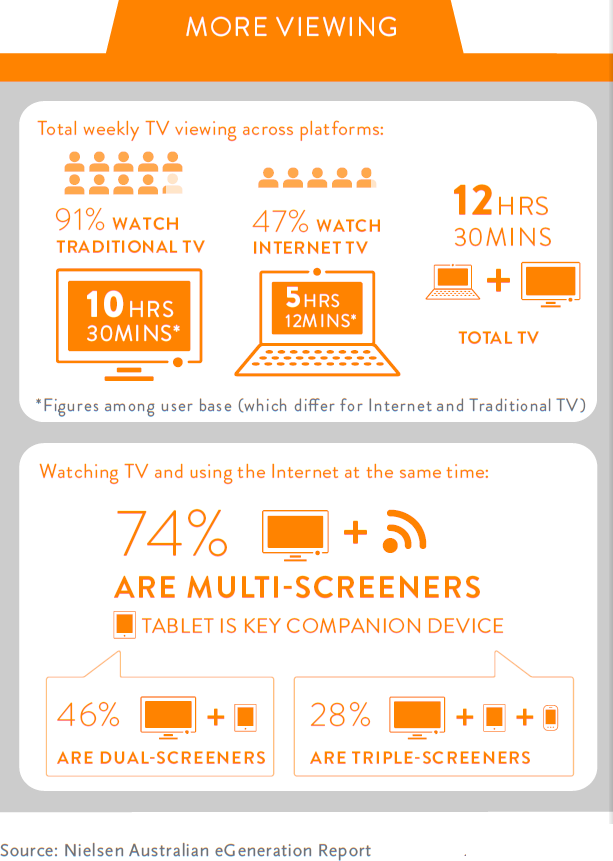 Traditional broadcast TV still dominates TV viewing with 9 in 10 (91 per cent) online kids watching TV. However, video on demand offerings are also popular among youth audiences with almost half engaging with downloaded or streamed TV content (47 per cent). Connected young people spend more time in an average week watching TV via traditional and online ways combined (12.5 hours), than they do using the Internet in general (11.5 hours using the Internet).

Kids and teens get their video on-demand content from a variety of sources – YouTube and the ABC are currently key providers in the Australian market. Streaming video in general (not just TV content) is one of the top three activities that online kids and teens do on a monthly basis (behind education and gaming) highlighting the importance of the video format among youth audiences.

Australian kids and teens are also using the Internet at an increasingly younger age. The emergence of video on demand as an easy form of entertainment for young children and user friendly devices such as tablets are likely drivers of early adoption of online content.

While the media landscape continues to rapidly evolve, TV remains crucial among our young online Aussies, and reaching them will require clever planning and fresh ideas. On one hand, you have the fragmentation of TV audiences across traditional and online platforms with the advent of video on demand; and on the other, you have the fragmentation of TV audiences with the advent of multi-screening behaviour. The audience is clearly hungry for content (which still remains king), but there are now new ways to engage with them to continue the conversation.