Fancy snapping up a struggling free-to-air telly network at a bargain price? Well, grab yourself a newspaper today and check out the “for sale” ad for Network Ten.

Ten’s administrators, KordaMentha have gone global in its search for a buyer for the embattled network and, as the ad reads, are offering a “rare opportunity to recapitalise or acquire an iconic Australian free to air broadcaster listed on the ASX”.

Check out the ad below: 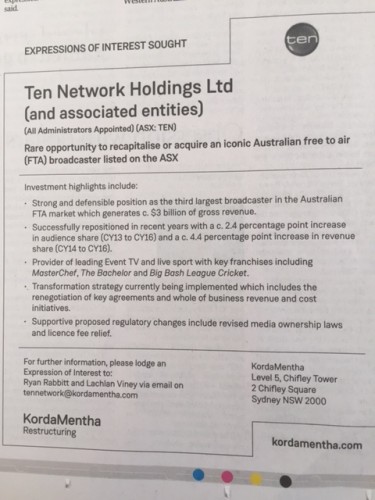 However, just because the network is being offered for sale doesn’t mean that KordaMentha has abandoned hope it recapitalise the business itself.

It’s widely believed that Gordon and Murdoch would hatch a deal to buy Ten outright, however, what that would look like is unclear given current media ownership laws.

Ten’s bosses are saying its “business as usual” despite the administrators, however, media reports have suggested the mood among staff at the network is palpable with everyone fearing for their jobs.

There had also been reports that the administrators had advised staff they cannot place any orders for goods or services without signed permission from Korda Mentha.

Despite the gloom hanging around the network it will most likely survive with Murdoch and Gordon the primary owners, alongside Foxtel and News Corp.

As the AFR noted last week: “News Corporation is attempting to tighten its grip around the Ten Network, with Sky News executives believed to have pitched an integration of the subscription news channel’s service with the free-to-air broadcaster’s news bulletins.”

However, as the ABC’s Media Watch program noted on Monday night, News Corp would probably prefer to get its hands on Nine and its NRL rights if the opportunity arose. “Why would News buy the worst house on the street? That’s not their style,” an ex-Ten staffer was quoted as saying.

While another added that a low-cost Ten Network, even coming third in the ad revenues, was still a good buy. “A low-cost Ten could easily be profitable even with a 15-20 per cent share of the TV ad market. And it’s currently got 24 per cent,” the ex-staffer told Media Watch.