As regular readers know, come Fridays B&T likes to lead with a lighthearted story to celebrate the pending weekend. Typically, it has something to do with semi-nudity, people hurting themselves or weather presenters losing their clothes live to air.

But not today, humble reader! Today it’s all about the growing and fascinating fad of home preserves. That’s right, we’re talking all things jam! 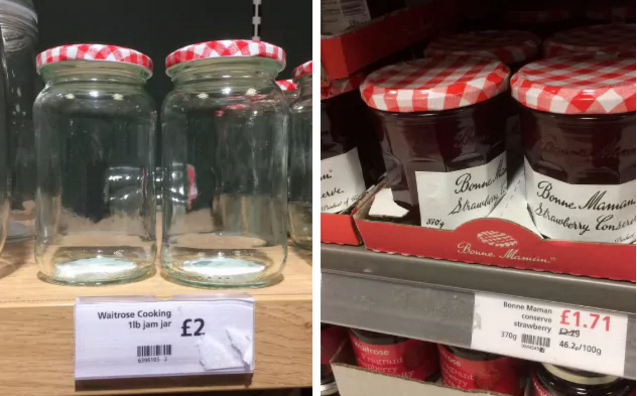 The UK’s The Telegraph is reporting on supermarket chain Waitrose selling jars of Bonne Maman Strawberry Conserve for £1.71 ($A2.75) right next to empty jam jars priced at £2 ($A3.22).

According to the article, the Brits are currently experiencing a massive resurgence in middle-class people wanting to make their own home jams, pickles and chutneys. Hence, the overpriced empty jars.

But empty jam jars aren’t just for jams, apparently. According to the article the Poms are buying them in droves to use as flower vases, candle holders and as posh packed lunch storage!

The Tele even quoted home design expert, Ben Kendrick, who added: “The jam jar trend has officially gone mad. The reason they came into fashion was because of an ‘up-cycling chic’ trend.”

As these things do, the images of the two jars went viral with Twitter users arguing everything from their different sizes hence the different prices, to turning into a debate about class. One tweet read: “Obvs for middle class jam makers. Working class jam makers just use old jam jars.”

Even Waitrose was forced to issue a statement: “Our Bonne Maman conserves are on a temporary promotion and represent great value for money,” a spokesman for the retailer said.