Advertise with us
Posted 9 October, 2017


It’s been a tough few years for retailer Myer, however, a new study out today has revealed it can at least gloat its customers are more satisfied than those of arch-rival David Jones.

According to the study by Roy Morgan Research, customer satisfaction with Myer in August 2017 was 88.6 per cent, which now places it ahead of its major competitor, David Jones on 85.1 per cent.

The study is based on the opinions of 2000 Aussie shoppers who had been to both the stores in the past four weeks. 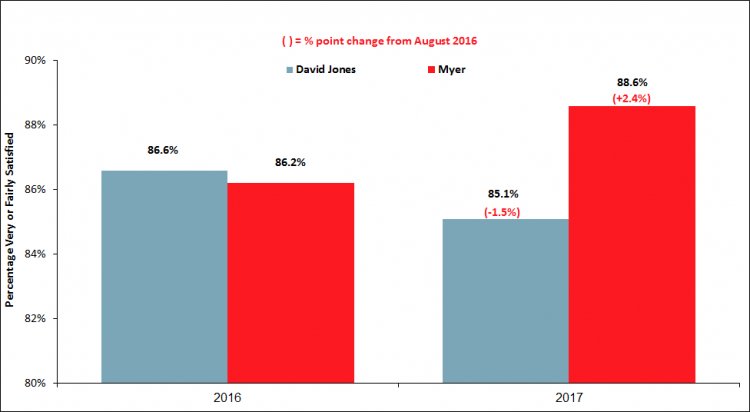 Over the last 12 months, Myer improved its customer satisfaction rating by 2.4 per cent points, while David Jones showed a decline of 1.5 percent points.

Twelve months ago, David Jones had a satisfaction rating of 86.6 per cent and was marginally ahead of Myer (86.2 per cent) but the last 12 months has seen a considerable reversal of this position with Myer now on 88.6 per cent and David Jones on 85.1 per cent.

David Jones has its highest customer satisfaction rating among ‘Pre-Boomers’ (those aged 71-plus) with 89.7 per cent, where it is higher than Myer (87.6 per cent). This generation only accounts for 9.9 per centof department store shoppers. Myer has its highest satisfaction rating (91 per cent) with ‘Generation X’ (aged 42 to 56), ahead of David Jones on 86.5 per cent. This is the most important group of department store shoppers in terms of customer numbers, accounting for 26.5 per cent of the total. 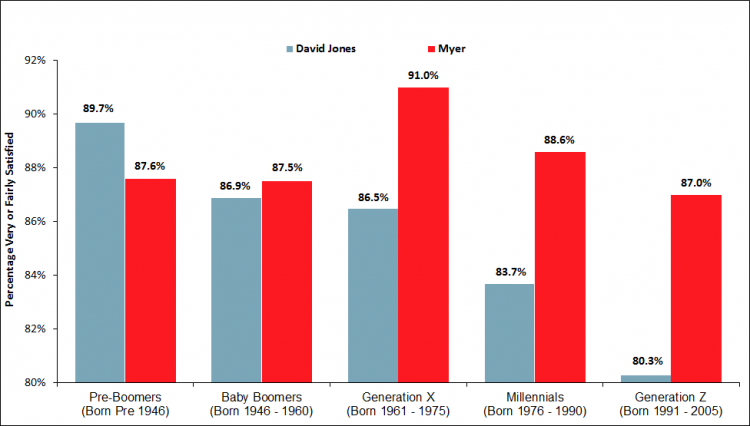 Myer performs much better than David Jones among ‘Millennials’ (aged 27 to 41) with 88.6 per cent compared to 83.7 per cent, with this generation accounting for 23.3 per cent of department store shoppers.

Commenting on the findings, Roy Morgan’s communications director, Norman Morris, said: “With department stores facing increasing competition from specialist retailers and new online players such as Amazon, it is important to keep track of how customers are rating their current retailers.