New research from Roy Morgan shows that over nine million Australians are already using devices such as smart TVs and streaming devices that enable access to addressable TV.

However, broadcasters are only just starting to mature their own technologies and data stacks to be able to leverage connected devices such as smart TVs, streaming and set top boxes to deliver personalised advertising.

The report also found that if you threw in other players such as Netflix, Stan or the ABC’s iView – platforms that don’t presently carry advertising, but could in the future  – the number of Australians that addressable advertising could access would be closer to the 14 million mark.

However, although the potential audience for addressable TV is already huge, and growing, there are still significant technical, data-related and investment hurdles for traditional broadcasters to overcome to fully exploit the commercial advantages that addressable TV can provide, the study noted. 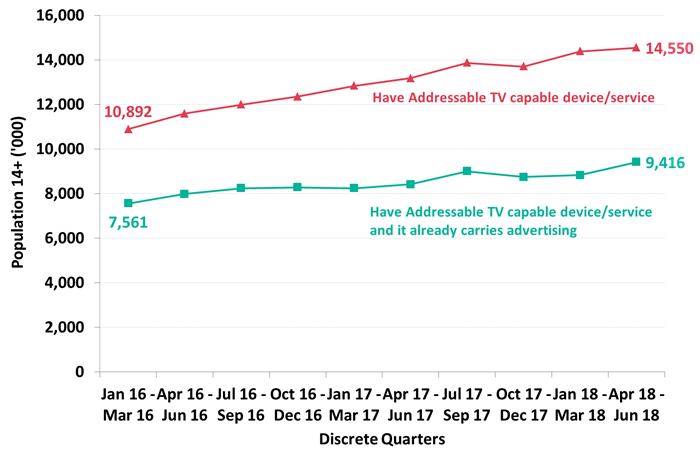 The services Australians already watch and which are used by over nine million Australians that have the potential to deliver addressable TV today include Foxtel, Foxtel Now, Foxtel on Demand, Fetch, Google Play, 9Now, SBS on Demand, TENplay and 7Plus.

Commenting on the findings, Roy Morgan’s CEO Michele Levine said: “The rise of digital advertising has dominated the media landscape in recent years. It now represents a majority of the $16 billion-plus Australian advertising market up from virtually nothing two decades ago.

“The attraction of digital advertising has increasingly revolved around the ability to advertise directly and to selecting targeted consumers with one-to-one marketing that traditional media has until now been unable to offer.

“The driving force behind ‘Addressable TV’ advertising technology is that it allows traditional media, and most particularly Australia’s TV broadcasters, to identify and target individuals and households based on specific criteria and deliver tailored advertising – just like digital advertising does.

“Addressable TV gives traditional Australian commercial TV broadcasters such as the Nine Network, Seven Network, Network Ten and Pay TV provider Foxtel the potential to compete on a level playing field with newer digital competitors such as Netflix, Amazon, Facebook, YouTube and others.

“New research from Roy Morgan shows that over nine million Australians today have technology that could be utilised by addressable TV technologies to serve different ads when Australian broadcasters overcome the significant technical, data-related and investment hurdles that still remain to be overcome.

“When one considers the phenomenal growth of SVOD services such as Netflix and Stan, covered in detail here, and the popular ABC iView, that also have the potential to carry addressable TV but don’t currently as these services do not carry advertising, well over 14 million Australians could be served addressable TV tomorrow.

“In addition, the ubiquitious nature of advanced digital devices across the Australian marketplace means over 95 per cent of Australians technically have addressable TV capable devices that for whatever reason are not currently configured for the service.

“The increasingly fast rate at which Australians adopt a multitude of new technologies does give great hope to traditional broadcasters developing addressable TV as a viable competitor to newer digital-centred services. Australians have shown an increasing willingness to try out new technologies and all the evidence from the marketplace shows that if done correctly addressable TV can be a formidable step forward for traditional broadcasters.”