Some 51 per cent of Australians say the internet has become their main source of media and news, up from eight per cent when a similar study was done in 2005.

Researchers from Roy Morgan interviewed 648 Australians over the age of 14 on their media habits. The internet was number one having risen 43 per cent in 12 years since the previous study.

And the internet’s success has come at the cost of other traditional medias. In the same period (2005-2017) people who said TV was their main source of media has halved from 48 per cent to 24 per cent.

Likewise, people who said newspapers were their main source of media has fallen from 22 per cent to 12 per cent in 2017.

Meanwhile, radio, although off a lower base, fell from 19 per cent to 12 per cent in the same period.

Which Media is Your Main Source of Information? 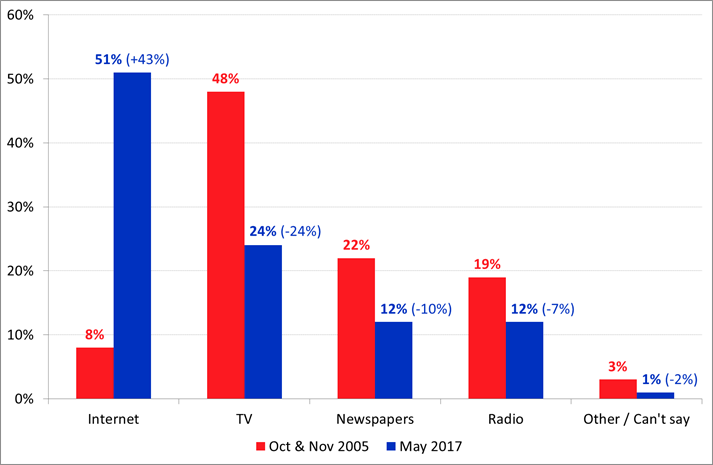 When it came to age demographics, respondents who said the internet was now their main source of media was 50-50 male to females. However, it was naturally much higher in the 14-24 demographic (81 per cent) than those aged 65-plus (15 per cent).

More women (26 per cent) preferred to get their media from TV than men (21 per cent) and the 50-64 age bracket was the one that most preferred that medium. Only 10 per cent of 14-24 year olds picked TV as their number one.