At the 2013 National Radio Conference radio’s Jules Lund told the audience how to make content go viral on social media in order to build a tribe or following for a brand.

In the few weeks that followed Lund’s talk – it became entirely redundant, because Facebook killed Edgerank – the algorithm used to prioritise Facebook posts relevant to the user.

“Not only can Facebook detect viral content, but it can block it,” Lund told the 2014 National Radio Conference on Friday.

Following the demise of EdgeRank, the organic reach of every single brand page dropped to an average of 2%. “So if you had 100 fans, Facebook would only deliver your content to two of them,” said Lund.

At this year’s conference, Lund asked: ‘How does a brand reach consumers via social media?’ “Write a cheque,” he said.

“This is the business model we should have seen coming,” he said. Many businesses were relishing in the fact they could reach thousands and millions of fans for free. But Lund quipped: “The first hit was for free – now little junkies, you’ve gotta cough up.” 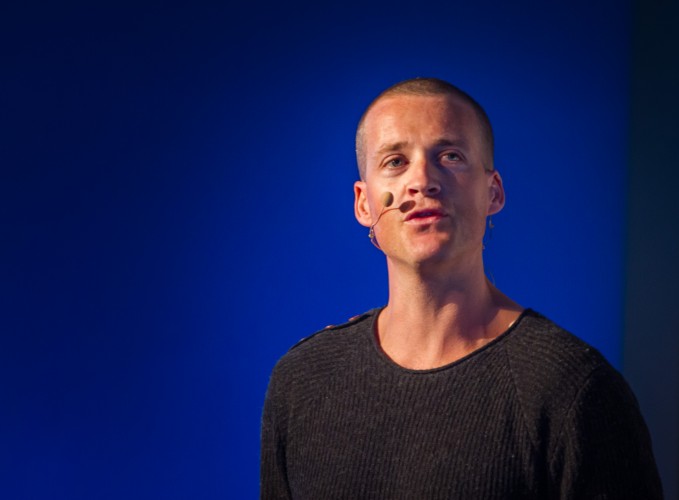 Jules Lund presenting at the 2014 National Radio Conference in Melbourne.

To explain the change in the social media marketing model, Lund used this analogy: “Imagine Channel Nine spending millions to create The Block. They then spend millions in marketing, which works, because millions of people are watching. But then imagine that the TV screen introduces a pay wall – so that the only way content reaches the audience is if Channel Nine pay that screen a shit load of cash. Then imagine how much money that screen would make from all of Channel Nine’s content. Now imagine the money that screen would make charging every channel in every country in the world. People paying shitloads to reach their own audience.”

Lund made the argument that every single brand page on Facebook is its own channel. “There are 21 million of them and it’s growing one million a month – all of them are paying to reach their own audience,” explained Lund. It’s a development by Facebook that Lund admitted is “fucking genius”.

Unlike a few years back when sharing pics, clips and articles was quite labour intensive, now everyone has smartphones and can post at the tap of a button. People are only collecting more friends and liking more pages, so as many as 15,000 potential stories can appear at any time they log in. As a result, competition in the newsfeed is increasing

Lund believes the only way around the monetisation of social media as a marketing tool is by buying reach. “It’s a trend that isn’t going away anytime soon,” he says. Twitter does a similar thing with promoted posts on its self-serve ad platform and the platform is working toward making user timelines more relevant which will encourage brands to pay for reach.

And many other social platforms, which were previously ad-free are now – or soon to become – monetised. These social platforms are able to deliver incredibly targeted advertising because of the access of big data, which is made easily accessible because of the information stored in an individual’s smart phone.

Lund calls big data “the gold rush of the 21st Century” but he insists consumers can make this work for them too. He said: “If I don’t have to sit through hundreds of tampon ads while watching The Bachelor, then that’s good. My smart TV will know I’m sitting there and will advertise to me locally because of the information it receives from my phone. I might get an ad for a nachos pizza at my favourite take away joint around the corner.”

Lund referenced a quote from his colleague, Clive Dickens, the outgoing director of digital and innovation at Southern Cross Austereo, who happened to be in the audience at the conference. Dickens had previously said: “Those who want to remain anonymous will simply have to write a cheque, so life will be more expensive for them. For those who can get over the creep-factor, they’ll have a more enriched content experience.”

In order to bring it back to ROI on social media as a marketing tool, Lund said he isn’t certain about how to achieve this. He said: “Using social to drag people to your site is a dying strategy.” He believes the best way for a brand to gain reach is by brands and influencers teaming up to promote a campaign.

“Traditionally, influencers were celebrities but in the digital world, it can be anyone with a fan base,” said Lund. The likely audience of a branded post will see it a mile away “and not give a shit,” he added.

Lund referred to a recent documentary he had watched called Generation Like and used the example of Tyler Oakley, a member of Generation Like as an example of a digital influencer. Oakley uses his presence on YouTube (his 5.5 million subscribers) to promote products and gets paid by brands to do so.

Lund believes brands partnering with influencers will be the future of social media marketing, because the influencers themselves are users of that particular brand. “There is no better endorsement than products you’ve already bought.”