Brisbane-born Lana, universally known as ‘the hot blonde in the passenger seat’ gave B&T the Australian exclusive, revealing they have signed a deal to front a campaign for Logitech’s UE speakers, call their fans “Sketcheteers”, and a TV offering is in the pipeline.

“We’ve had so many comments and requests about doing another Mime through Time so it was only fair,” laughed Lana. “We’d do way more if it wasn’t so expensive to get the licensing. 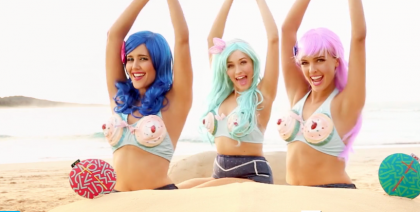 “For this video we decided to keep it very Australiana and shot it on the on the Sunshine Coast. Shay and I are both from Queensland, so we thought we’d go back home, set up on the beach, and it’s just such a beautiful setting. You can’t really beat the East Coast of Australia in my opinion.”

SketchSHE shot to fame in March with their spoof music mash-up ‘Bohemian Carsody’ – which has now had in excess of 25 million views – and speaking of their meteoric rise to fame, Lana laughed, “we put it on Facebook and the beauty of Bohemian Carsody is that it’s so sharable. People can relate to it, everyone sings and dances in the car and that’s how it snowballed – from five people sharing, and their five friends sharing…

“Then all of a sudden you’ve got 500 people watching it, 5,000 and then 50,000…it’s three girls dancing and grabbing their boobs so it really ticks pretty much every box – and there is head banging, of course, which is I think is vital to a viral video.

“It was a song that we all really loved and we think it’s really important to us and that marriage of music and comedy is such a brilliant one. It’s one that we really holding on to right now and using that to our advantage.”

The trio are being billed as the next Spice Girls, albeit for the digital age, and recently signed with LA-based manager Richard Bron who thinks their marketability is unprecedented.

As well as the music videos, more than a million fans have signed up to their SketchSHE YouTube channel where the girls have posted other hilarious videos, including spoof info-commercials such as the ‘slutguard’ and a funny but slightly worryingly psychotic skit about imprisoning Ryan Gosling in the closet.

There is also an amusing sketch called Present Day Princesses, featuring the girls as three flatmates, in the style of Disney on crack. One, ‘Belle’, goes on a date that turns disastrous so they go and find ‘Alice’, who is high on acid at a club called Wonderland, before then coming back home to ‘Aurora’ who is an alcoholic insomniac.

The girls have a TV show in the works and also recently recorded some songs at Capitol Records in the US with Adam Anders, the mastermind behind Glee – but it doesn’t sound like the Spice Girls’ much fan-fared comeback is threatened just yet.

“The three of us, having no singing training, whatsoever all went upstairs and recorded our voices individually,” Lana cringed.

“It was the most nerve wracking thing I have done in my entire life. We can sing varying degrees but it’s amazing what you can do with a good setup – let me tell you, technology is definitely working in our favour!”

It may still be brass monkeys at the moment but Lana reckons summer has already hit Queensland and reveals their top five tips for getting beach ready over the coming months:

1. Take numb-chucks – you may need to fend yourself against giant seagulls or David Hasslehoff.

2. Lather up on sunscreen, nobody likes a beetroot-ish babe.

3. Do everything in slow mo – even when you eat your fish and chips! “Cause…well…it’s sexier, yo!”

4. Don’t be afraid of creativity. Take that towel and use it as a turban AND a sarong. Nice!

5. Pack your UE speakers – because even fending off seagulls with numb-chucks in slow-mo is better with tunes!