Readership of print magazines was just under 12.6 million Australians aged 14-plus (62.3 per cent), virtually unchanged from a year ago.

Other leading magazines to increase their print readership included National Geographic (+1.3 per cent), Royal Auto (+9 per cent), Road Ahead (+5.8 per cent) and just outside the Top 15 both Gardening Australia (+13.6 per cent) and Super Food Ideas (+1.5 per cent). 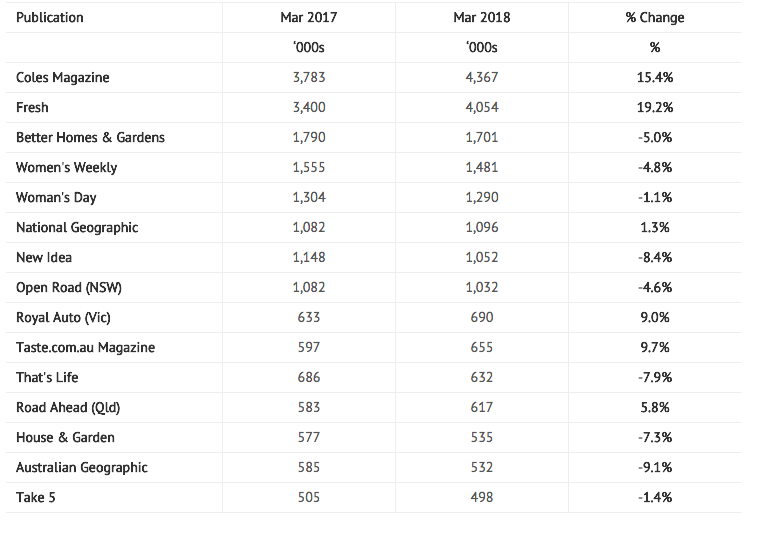 Food and entertainment is now Australia’s best performing magazine category and is now read by 6,507,000 Australians, or 32.2 per cent of the population, up 11.3 per cent in the year to March 2018. Over the last year more than half of the 11 magazines in this category increased their readership.

This category is dominated by the free supermarket titles both of which saw exceptional year-on-year growth – Coles Magazine with readership of 4,367,000 (up 15.4 per cent) and Woolworth’s Fresh now read by over four million Australians for the first time with a readership of 4,054,000 (up 19.2 per cent).

Other titles to perform well over the past year include Selector which increased 27.9 per cent to 87,000 readers and Super Food Ideas up 1.5 per cent to 467,000 readers. 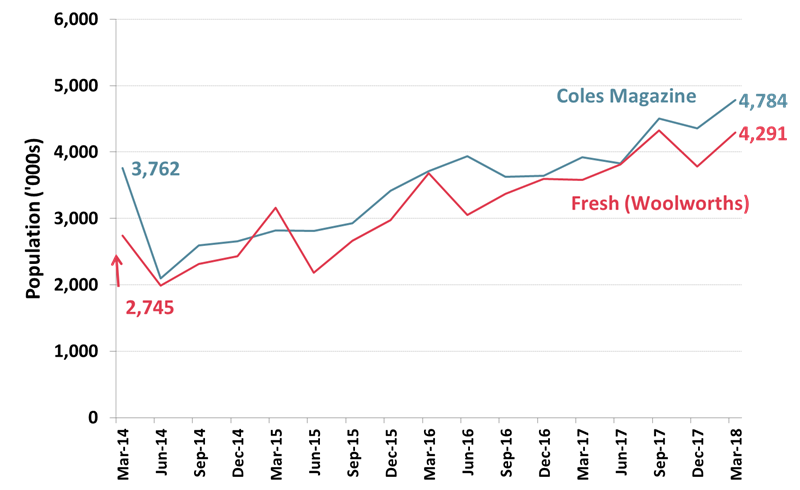 Some 4,505,000 Australians, or 22.3 per cent of the population, read at least one of the general interest magazine titles. The category leading title National Geographic has a readership of 1,096,000 (up 1.3 per cent).

Although the readership of mass women’s magazines has decreased year (down 5.4 per cent from a year ago) a very impressive 3,293,000 Australians, equal to 16.3 per cent of the population, read these titles.

The recent decision by Bauer Media to publish a monthly edition of Take 5 magazine – in addition to its  weekly is a new strategy that marketers,  advertisers and Roy Morgan, will be watching closely to see how it impacts upon the Take 5 weekly edition readership.

The fourth most popular category of magazines remains home and garden publications, despite a drop of 2.7 per cent in the last 12 months. Almost three million (2,934,000) Australians now read at least one magazine in this category.

Better Homes and Gardens maintains its dominant position in the category with a readership of 1,701,000 (down five per cent).

Women’s fashion magazines have experienced category growth of 2.6 per cent over the past year to be the seventh most widely read category overall with readership of 1,221,000, or six per cent of the population in the year to March 2018.

The fastest growing women’s fashion magazine was Cosmopolitan Bride which increased its readership by 16.7 per cent to a readership of 42,000 followed by Elle magazine, now read by 164,000 people (up 5.1 per cent). Vogue Australia was also a strong performer increasing its readership to 346,000 (up 2.4 per cent).

Of Australia’s leading ten magazines ranked by cross-platform audience seven retain a significantly larger readership via their print editions than their digital platforms. As more magazine publishers expand their online offerings this is slowly changing although magazines remain significantly more reliant on print editions than their online engagement.

Just under a year ago many of Bauer Media’s magazine brands (including Women’s Weekly, Woman’s Day, Good Health, Mother & Baby, Take 5 and others) consolidated their online presence under category banners such as Now to Love which has a digital audience of 872,000. The results in the cross platform table below reflect this new positioning and therefore year on year comparisons are not available for all titles.