There’s a reason they’re called Man’s Best Friend. Pooches bring out the goodness in the human race, at least that’s the message Pedigree wants to showcase in its latest campaign, ‘Feed The Good’.

The campaign by Val Morgan Outdoor aims to drive awareness and donations to the Mars Petcare charity partner, PetRescue, and does so by a digital interactive activations on two massive screens in Sydney and Melbourne that encourage consumers to make a $2 donation. 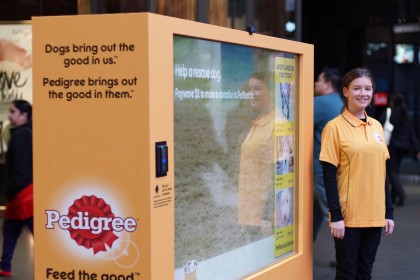 Once the contactless donation has been fed through the out-of-home panel, a virtual dog appears on-screen gobbling up its food.

The super-screens will show the activation in Melbourne Central today, and Sydney’s World Square tomorrow.

The campaign includes a 30 second TVC as well as the activations.

After that they will be on smaller screens in 50 Coles supermarkets around the country.

Pedigree has a vision to feed 100 million canines globally, and the digital experience aims to illustrate the impact a small donation will have on feeding dogs around Australia.

Sylvia Burbery, general manager Mars Petcare said: “Pedigree believes that dogs make the world a better place and bring out the good in us all. ‘Feed the Good’ sets out to connect with Australians emotionally and encourage a donation of just $2 to help raise vital funds for our established charity partner, PetRescue and support the fantastic work they do to care for and re-home unclaimed animals.

“Debuting Australian-first technology is hugely exciting; when combined with compelling creative and a fully integrated campaign strategy that spans multiple channels, we will inspire positive consumer engagement that delivers cut through.”