The Australian’s typically controversial cartoonist Bill Leak has produced a cartoon in this morning’s ‘Bleak View’ segment, which has been picked up by social media and lambasted as “racist”.

The cartoon depicts a police officer returning a young Indigenous Australian boy to his father, telling him to “talk to your son about personal responsibility”, to which the father responds, “Yeah righto, what’s his name then?”

The cartoon has been published on the National Aboriginal Children’s Day, and led to The NSW Aboriginal Land Council (NSWALC) to lodge a complaint, while the Australian Press Council confirmed it had received a complaint already about the cartoon. 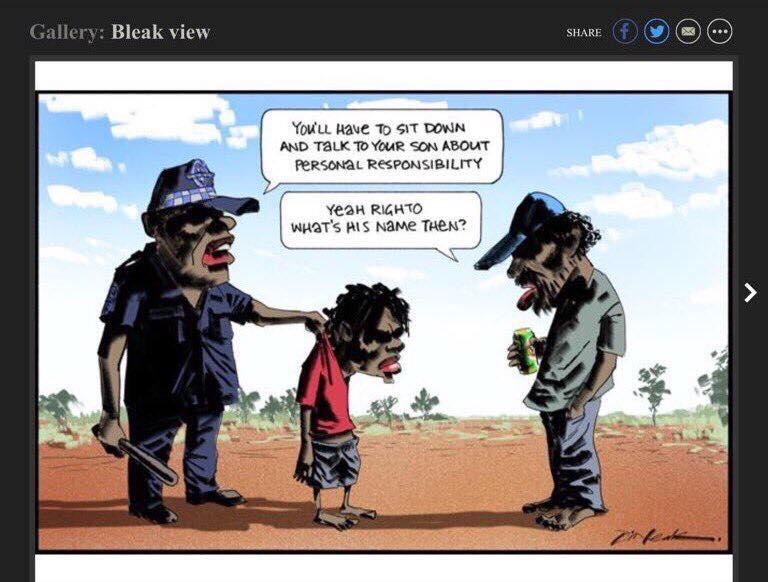 The cartoon that appeals to racial stereotypes of Indigenous Australians no doubt is referring to the current situation at the Don Dale Juvenile Detention Centre in Darwin, however the cartoon itself on The Oz offers no commentary or explanation as to the idea behind the drawing.

The NSWALC chair Roy Ah-See said the cartoon, based on the Royal Commission into the shocking mistreatment of children in the Northern Territory juvenile justice system, has “insulted and denigrated Aboriginal people”.

“Sadly, racism and discrimination is a fact of life for Aboriginal people,” he said. “The hurt and humiliation that victims of racism experience is real and has a terrible toll on the health and well-being of Aboriginal people.

“Bill Leak’s cartoon is ugly, insulting and it is embarrassing for Australia’s national newspaper to publish it. It is time the decision-makers at The Australian accept personal responsibility for the hurt they have caused Aboriginal people today.”

Twitter has latched onto the issue already, with renowned cartoonist for The Guardian, Andrew Marlton (AKA First Dog On The Moon), calling it “racist garbage”.

i rarely express a view on other cartoonist’s work. it makes the conferences weird. but bill’s cartoon today is straight up racist garbage

@MaizeWallin @firstdogonmoon I guess I shouldn’t be surprised, coming from the Minions of Murdoch, but serious WTFery.

Bad news:The Australian published Bill Leaks racist,unfunny, sickening cartoon 2day.Good news:it’s such a shit paper not many will see it.

This is #racist hate speech.

From today’s @australian & we wonder how #dondale possible when we dehumanise #ATSI. pic.twitter.com/5u9cT0JFeG

The @australian mocking complex social, personal and family issues. Shouldn’t have made it to print. Vile #auspol pic.twitter.com/dcopuU6CJ2