Only Nine’s State of Origin has beaten Ninja in this year’s ratings. That said, it was always going to be an easy run for Nine, with Seven and Ten basically not even bothering to put premium content against it. Seven ran Mighty Cruise Ships and Ten had All Star Family Feud. Both getting 369,000 and 210,000 viewers respectively.

However, last night’s grand final wasn’t without controversy after it failed to produce a winner, claims the course was impossible to complete, a contestant gaffe and even a spoiler, too.

Fans of the show were left fuming after none of last night’s (all male) finalists managed to complete the course, meaning there was no eventual winner.

Plus, Nine didn’t have to splash-out the $100,000 winner’s prize cheque either. Nine has confirmed to B&T that the prize money will be rolled-over into series two.

The general consensus among fans was that the course was simply impossible to compete in the 65-second time limit forcing contestants to take greater risks. Fans taking to social media to describe the non-winner as an “anti-climax” and “ruining” the series they’d invested so much time in.

In a statement sent to B&T, a spokesperson for the show’s producer Endemol Shine, said, “Australian Ninja Warrior features the toughest obstacle course in the world. To gain the right to take on and defeat Mt Midoriyama requires a perfect run in stage two of the finals. It took seven seasons in the USA, remains unconquered in the UK, and the challenge is on for the second season here in Australia.” 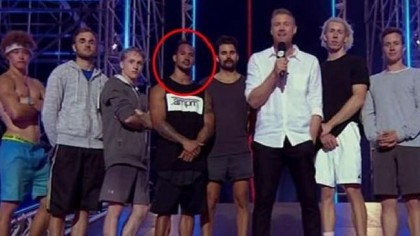 In another apparent blunder, Nine also managed to run images of Johann Ofner (above) who was a contestant when the show was recorded in January, however, was killed in a stuntman accident shortly after.

However, a Nine spokesperson told B&T that the inclusion of Ofner was intentional and intended as a tribute to him. 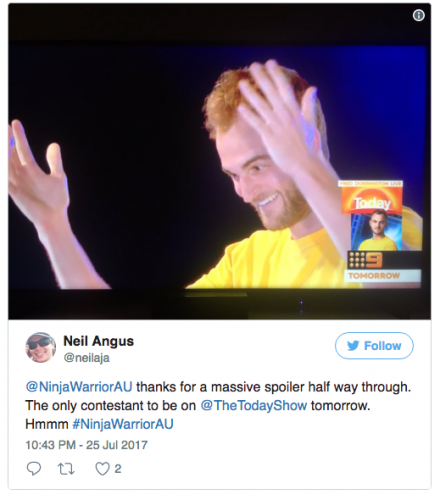 And to complete the treble of woes, Nine flashed-up a graphic of contestant Fred Dorrington during the last night’s show announcing he would be appearing on its Today show this morning, therefore giving it away that Forrington was the contestant with the best time.

Here’s just some of the social media storm from last night’s grand final: