As you’re probably well aware, last Friday night creative wunderkinds The Monkeys, as part of Accenture Interactive, took home “Agency of the decade” at the B&T Awards. And, we don’t need to tell you, a prestigious accolade like that only comes along once in every 10 years or so.

And to celebrate the momentous gong, B&T has decided to showcase the agency’s best work over its tenure. Although, admittedly, the agency first started back in 2006 as the then Three Drunk Monkeys. 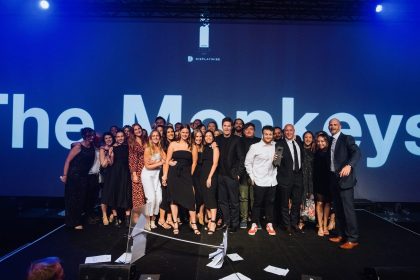 The initial idea was for B&T journalists to research, probe and prod a piece and countdown The Monkeys’ best 10 campaigns over the past 10 years.

But, as that sounded like too much work, we simply asked its founding fathers – Justin Drape, Scott Nowell and Mark Green – to pick their top 10 favourites for us.

So, here they are in descending order from 10(ish) to greatest(ish)!

Nasty things turn to gold in a 2013 campaign for the independent financier, UBank. Consisting of two spots, The Monkeys graphically visualised all the money people could save by refinancing their homes. The money is depicted as UBank customers’ metaphors – a volcano erupting with liquid gold and, more brilliantly, as a dog that defecates gold bars.

The Monkeys and US-based mixed-media director Sean Pecknold from Grandchildren created two brand identity commercials for BBC Knowledge: Eat Up Brain which featured the voice of actor Richard E Grant, and “Honk If You’re Human” which was voiced by comedian Stephen K. Amos.

Intelligent Sounds was an experimental film project created by The Monkeys for tech firm Intel. It included music, technology and advertising and features a band of robots performing a soundtrack performed by Aussie artist Flume.

The Monkeys took the not-so-interesting topic of home insurance and turned it into a koala conservation spot in this moving piece for NRMA that saw the insurer donate a portion of premiums to Conservation Volunteers Australia to plant more trees for protecting koala habitats. It was developed by an integrated agency group with CHE Proximity, Havas, Mindshare and Thinkerbell.

As the campaign suggests, the “out of office” email is arguably the most boring email you ever write at work. But all that changed with this nifty campaign for Qantas that turned the humble office reminder into your very own holiday picture gallery. With the simple addition of #qantasoutofoffice you got to brag about your latest holiday escapades. But hopefully not remind potential burglars you were out of the country.

To promote skin cancer awareness The Monkeys teamed with musician Ben Lee to create a simple melody that was played at beaches, schools, sports grounds and pools, reminding Aussies to protect themselves from the sun.

In what was the first Airbnb collaboration in the world, The Monkeys helped IKEA turn the spotlight on its bedrooms and bathrooms by allowing Aussie families to spend the night in the furniture chain’s Sydney store at Tempe. The work picked-up global attention across Time Magazine, Daily Mail and Huffington Post among others.

When it came to big productions, this one had it all. The Monkeys (or The Three Drunk Monkeys as they were known at the time) pulled together a stellar line-up of talent to celebrate Australia’s most iconic building. The ad took 10 months to produce and included such luminaries as Neil Finn, Kev Carmody, Sarah Blasko, Angus and Julia Stone, Paul Kelly, Temper Trap, Martha Wainwright, Katie Noonan and Daniel Johns all performing the Nick Cave classic The Ship Song.

The almost hypnotic TVC highlighted the tribulations women faced when not wearing a correctly fitted sports bra. Still, the ad received over 100 complaints to the Ad Standards Board from viewers who believed it was not appropriate for children and incited violence against women. Despite an ASB review, the complaints were later upheld. As one person wrote to Facebook: “Berlei I hate your new sports bra ad. It is offensive to women, especially those who have lost their breasts to breast cancer or have had treatment for breast cancer.”

(1) “We love our lamb” For the Meat And Livestock Australia

There can only be one winner for The Monkeys and – some may say predictably – its the agency’s annual meatfest for the MLA. Released just in time for Australia Day, the highly anticipated spots are often as comical as they are controversial. So which one wins? 2017’s “You never lamb alone”, 2016’s plea for diversity or  2019’s call for Australia and New Zealand to become one nation. For no particular reason, B&T’s gone for 2015’s epic “Barbecue at Richie’s house”.