Customer service management platform, Salesforce, is reportedly on the chopping block with rumours circulating that Microsoft and Oracle are considering takeover bids.

One cautionary note before we go on: there is no confirmation that a move from either company is really on. The only firm fact is that Bill McDermott, CEO of SAP an enterprise software company, told CNBC that he has “zero interest” in acquiring the software rival.

Salesforce, which has a market value of almost US$50 billion, is a leader in customer relationship management (CRM) software and cloud computing. Bloomberg reported that “a takeover of Salesforce would be the largest ever of a software company, and for any buyer it would mark an aggressive push into cloud computing.” 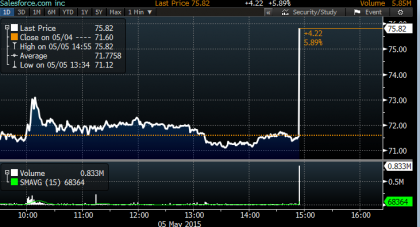 Bloomberg says Microsoft was not the original unnamed bidder, but is instead reacting to circumstances. Microsoft and Salesforce reached an agreement last year to make the companies’ software work better together. Microsoft, which sells its own customer-management software, lags behind Salesforce.

In addition to Microsoft, Oracle, Google and IBM have also been suggested as potential suitors.

Tony Imperati, a spokesman for Microsoft, and Chi Hea Cho, a spokeswoman for Salesforce, declined to comment.

Oracle Corp. chief executive officer Safra Catz said last week an acquisition of Salesforce would create disruption in the software market. She declined to comment on whether Oracle was interested in buying Salesforce.

The price, is rumoured at $US44 billion – even though Salesforce is currently valued at $50 billion. To provide some perspective, the total CRM market is only US$20 billion according to Gartner, and Salesforce’s market share is just more than 16 per cent.