It appears Dee Madigan’s campaign to have the Australia Day ad featuring kids wearing the hijab reinstated is coming to fruition after an out-of-home campaign was spotted around the streets of Sydney and Melbourne featuring the image.

Madigan – author, broadcaster and ECD at the Campaign Edge – started the campaign after the original version was pulled following alleged threats from right-wing groups. 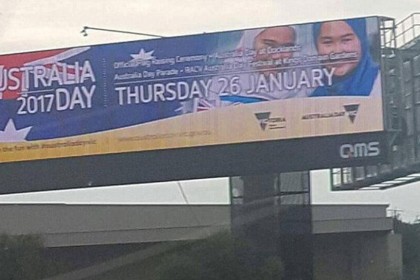 The original ad featured in a digital campaign and was first spotted on a QMS billboard in Melbourne 10 days ago. Photos of the billboard made in onto social media and racist groups reportedly made physical threats to staff at QMS. The campaign was subsequently pulled.

Madigan started a crowdfunding campaign and quickly raised $100,000 to have the campaign put back up. Her plan was simple – to run the image of the two Brisbane kids with a simple Australia Day message that ran in outdoor and print newspapers.

However, judging by the sponsor logos at the bottom of the campaign, few in the media industry have thrown its support behind it. Sponsor logos included Madigan’s own Campaign Edge, Australian Unions, Jackie Trad (MP), The Anglican Church, (business advisers) SBMStavros, TIYCE Lawyers, JBT Lawyers, United Muslims of Australia and Berala Dental.

Madigan told B&T of the original concept, “It was a digital billboard of lots of different people and ethnicities and the only ones that got complained about were the Muslims.

“I think it’s a very small minority (complaining about the ad) with very loud voices; it’s disproportionate, it’s the lunatic fringes,” she said.