A British TV journalist who fronted a live cross with dishevelled hair and an unhinged stare has become social media’s latest star.

Telegraph journalist Sherelle Jacobs (pink coat) was broadcasting live from The Houses Of Parliament with fellow reporter, The Observer’s Sonia Sodha, at 7am when she appeared to go into a trance-like state and not realise she was live on breakfast television

This led some viewers to suggest that Jacobs had arrived for the live cross direct from a London nightclub and was possibly even drug affected.

One wag tweeting: “It’s 4am. You are on the way to the 24-hour garage for some Rizlas and two tins of Lilt. The rozzers stop you. Your mate has had loads of whizz but you are peaking on a Purple Ohm.”

Another commented: “When you’re booked to go on BBC News at 7 in the morning but were still off your tits at 5 so you let your colleague do all the talking…….”

“Either that or she’s started the day with 37 espressos,” penned another.

Not so, Jacobs later revealed via her Twitter account. And, in fact, it was all due to her professional and steely determination. 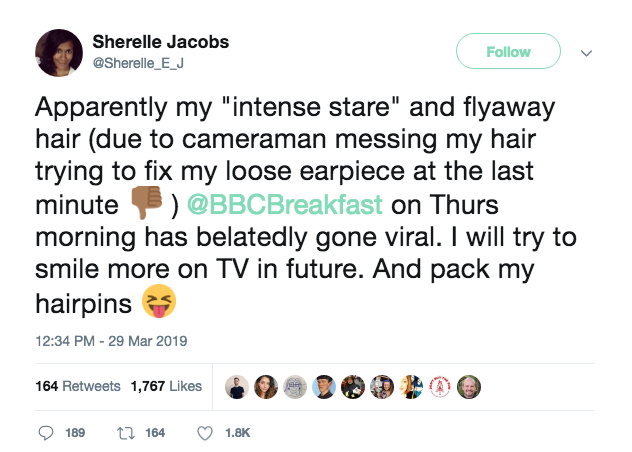 And Jacobs has received her share of admirers, too.

“How many times have we seen male journalists w rumpled hair and stern expressions and we chalk it up to their ‘serious’ work? Why do women have to be perfectly coiffed and smiling, or they get slagged as drunk? You’re handling this gracefully but it’s unfair. Forget the hairpins,” tweeted one fan.

While another added: “Oh, come on…. That was just superb..! Up all night – seriously! Clearly having been on the lash – you deserve an award for holding that together at silly O’Clock in the morning….!!!”

“To be fair, I think you represented how we all feel about Brexit at the moment,” said another.