While B&T’s Changing the Ratio has been postponed, that doesn’t mean the conversations around diversity and inclusion need to end. In fact, talking about it is more important than ever.

Over the month of May, we’ll be running an article series, kindly sponsored by CHE Proximity and Adrenalin Media, around why changing the ratio is still paramount, even during these difficult times.

In today’s article, we chatted with podcast host and speaker Marlee Silva around why it’s important to have an Indigenous-owned media company and voice in the Australian landscape, and why we shouldn’t stop the conversations and diversity and inclusion during COVID-19. 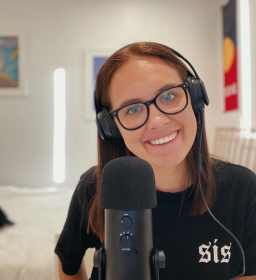 Gamilaroi/Dunghutti woman Marlee Silva has had a long-held interest in podcasting and sharing Indigenous stories. In 2018, with the help of Mamamia, Silva founded and curated Tiddas 4 Tiddas, a story sharing network that showcases successful Aboriginal and Torres Strait Islander women role models and their stories, while also circulating advice and academic, sporting and other opportunities for young Indigenous women to reach their full potential.

For Silva, working with Mamamia helped her learn the ropes of podcasting, but she said she’d always planned to eventually go off on her own and have a fully Aboriginal owned and run project.

And now, she’s done just that. Always Our Stories is produced, scripted and edited by Silva, all from her home. While she intended to launch the first episode to coincide with NAIDOC week in July, with the COVID-19 crisis and everyone being stuck at home and consuming more content, she thought: why wait?

She said: “I was so thankful for Mamamia because I kind of knew nothing about podcasts when I started and they taught me all the ropes and helped me gain confidence and refine my desire of what I wanted my own thing to look like.”

Silva said it’s definitely been a “very different experience” to what she did with Mamamia, as she learns how to turn her bedroom into a soundproof room and conducts all her interview over the phone.

Guests on the podcast will be people Silva knows on a personal level, who she says also happen to be “really incredible Aboriginal role models. ”

She said: “They’re people I’ve met along my Tiddas 4 Tiddas journey. They range from some sports stars, some advocates and CEOs and founders of companies and then also small-time business owners.”

With a few interviews under her belt already, Silva said the difference between her Tiddas 4 Tiddas podcast an Always Our Stories is that she’s able to interview anyone and everyone, not necessarily big-named guests.

While Silva said it was never explicitly ordered, she was pushed to interview women with higher profiles.

“Obviously bigger media companies have certain things they want to hit and then they’d like to see things high in the charts,” said Silva.

However, this time around, a social media follower isn’t important to Silva.

“I want the value-add for all my guests to be equal to me hearing their stories. It’s very much about capturing the stories, inspiring people and you know, getting attention to what they’re working on to get support. It’s real.”

Not the first Aboriginal-run podcast, Silva certainly is one of the first to do it solo, saying that everything that comes out of this project she wants to benefit Aboriginal people directly. According to her, that’s the benefit and importance of having an Aboriginal-owned and run media company.

“If we have full control over how we’re represented, it doesn’t automatically make us better at telling those stories, but it definitely helps because we have a level of understanding and empathy that non-indigenous Australia can’t have.

“It also means that there are things that we take into account that I think is hard for non-Indigenous people to think about if they haven’t worked in our space for 20 years or have an expertise in the area.

“It’s also important how certain issues are discussed, to avoid insulting anyone or causing offence and also, championing the Aboriginal voices that you capture.”

Silva said that she often finds in mainstream media, Aboriginal stories are told in a negative light.

“It’s unfortunate that a lot of the time we’re spoken about as victims of something or over-represented in a really negative statistic. A big focus of mine is to really talk strengths-based stories and have those positive ones at the forefront.

“It’s really important to have our stories in our hands. And also, there’s there’s a lot of complications and potential dangers in non-Indigenous media companies profiting off Aboriginal suffering, which isn’t what Mamamia was doing at all, but it’s the little things.

“Like for season two of Tiddas 4 Tiddas, I didn’t have a sponsor and I was looking to kind of reach out to small indigenous businesses to buy a sponsorship space but their budget just wasn’t there to deal with a big company like that, it’s more than what these businesses make in a year.

“That sort of stuff becomes really inaccessible so having my full ownership over this is important.

While Silva said sponsorship isn’t something she’s exploring right now, she doesn’t want to turn away anyone who wants to buy an ad in the future, no matter how much they can afford to pay.

“It’s that sort of stuff that makes it kind of more grassroots and we just understand our landscape a lot better.”

Another part of Silva’s new venture is making the production side of creating a podcast accessible to Indigneous people.

“I want to encourage more Indigenous people to take this into their own hands and do their own versions of it. On Instagram I’ve been documenting everything, like how I’m creating it, what programmes I’m using, what technology I’m using, and what I’m learning as I’m going through.”

“How are you recording from home?” 🎧 That’s the question I’ve been asked most since announcing this new pod so I thought I’d share a few of the ingredients that are helping me out and streamlining the whole process (I’m no expert of course, just sharing what I’m learning as I’m moving through it all!) 1. This pic captures the only gear I’ve been using to record and edit audio a Blue Yeti USB Mic, my headphones and literally just GarageBand – it’s simple, I’m not going for bells and whistles and it works. 2. @anchor.fm = life saver! Non-stop shop for building and distributing your podcast on all available platforms including Spotify and Apple Podcasts! And has free background music/transition sounds you can add in. 3. @squadcastfm is the free online program I’ve been using to record audio with guests in isolation (records all guests audio separately, which is really important to maintain your audio quality), and 4. Each room is different and I’m finding soundproofing is all about trial and error – what’s working in my home studio (i.e. my bedroom) is a few rolled towels/blankets under the door, blinds down, closed windows (yes it becomes a sweat box) and it helps that it’s a carpeted, small room ✌🏽 . . . . #alwaysourstories #podcasting #tips #aboriginalaustralia #storytelling #culture #community #knowledge #indigenous #comingsoon

“I don’t want to be a gatekeeper to the knowledge that I’ve learned in the last 18 months from working with one of the media companies in Australia who was the first to jump on the podcast game. I want to pass it on to other people. It’d feel really inappropriate if I didn’t.”

“If the rooms where the conversations are happening don’t look like what the real worlds like where people are different have different experiences, then we end up just regurgitating the same stories and we’d never learn or grow or come up with solutions, especially when we’re in the middle of a situation like this.

“I think diverse perspectives mean diverse ideas. And we need to think like that when we’re living in a post COVID world that will never go back to being exactly as we were before all of this happened. This is the biggest shake-up we’ve ever seen and it’s a no-brainer to have a better representation of all different types of people in any situation.”

You can listen to the podcast here.

Special thanks to CHE Proximity and Adrenalin Media for making this content series possible.